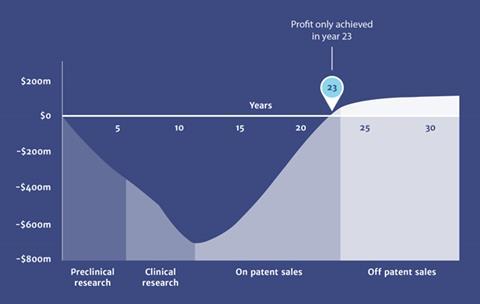 Industry's dilemma: new antibiotics are in demand but the returns are often low and take years to be realised

Pharma firms need better incentives to create novel antibiotics to head off an ‘apocalyptic scenario’ where commonplace infections become deadly once more. And the latest report from economist Jim O’Neill, who has been commissioned by the UK government to investigate how to tackle antimicrobial resistance (AMR), offers two ways to make developing antibiotics more attractive to industry. He recommends rewarding firms that develop a new antibiotic with a substantial lump sum. Secondly, a global innovation fund should be set up with $2 billion (£1.3 billion) to be invested over five years to boost blue skies research into drugs and diagnostics. But questions remain over how to run such a scheme and where the money would come from.

A previous report from O’Neill warned that the true cost of antimicrobial resistance (AMR) would be $100 trillion and 300 million premature deaths if no action was taken between now and 2050. But drug companies complain that developing novel antibiotics is a bad investment as these drugs are held back to use as a last resort against drug-resistant bacteria. This means sales are low and the firms find it difficult to make back the money they put into R&D. Consequently, companies have slashed investment in antibiotic R&D in recent decades and turned their attention to more lucrative markets such as oncology.

The report estimates it will cost between $16 billion and $37 billion to produce 15 new drugs over 10 years. The global market for antibiotics is currently about $40 billion a year. Antibiotic resistance costs the US alone $20 billion every year, meaning that the sums add up for tackling this problem.

O’Neill’s idea is to set up a global body awarding lump sum payments to successful drug developers regardless of sales figures. This would buy the global sales rights to new antibiotics and manage their supply internationally. This de-links profits from sales, conserving valuable antibiotics by eliminating the incentive to sell in bulk.

An alternative ‘hybrid model’ would pay a smaller lump sum to companies, but allow them to sell their drugs at a profit too – with conditions. Ideally the new global payer would offer the only route to market for a new antibiotic, and this would require significant buy-in from rich countries but also the BRIC countries, the memorable acronym O’Neill coined for Brazil, Russia, India and China. O’Neill is now pushing to have antibiotic resistance high on the agenda of the G20 next year.

The report, however, has not laid out where the money would come from. ‘The devil is always in the detail, but what is interesting is that the major companies aren’t reacting to this like it’s a terrible idea,’ says Kevin Outterson, professor of law at Boston University, who contributed to the report as an external expert. ‘The major companies are saying this is the sort of discussion we need to be having.’ Outterson suggests the Medicines Patent Pool could hold onto intellectual property for new antibiotics – they already hold HIV patents.

‘If you talk to senior people at the companies, I think they prefer the buyout model if the amount is generous enough,’ says Outterson. This would be more straightforward and easier to administer, but the hybrid model might be cheaper.

GlaxoSmithKline (GSK) and Merck & Co are among the last of big pharma still developing antibiotics. GSK said it was encouraged by the new ideas for investment in research. ‘The key thing with either of the models is that there is enough certainty for companies to make big investments, particularly in Phase II and III studies, and be sure that there will be a sufficient market to get a return,’ says James Anderson, director of public policy at GSK.

Others brim with questions over the details. ‘First, who is going to pay for this fund?’ asks Mark Lloyd Davies, chair of the Association of the British Pharmaceutical Industry (ABPI) antibiotics network. ‘Is industry being asked to contribute to this fund and then get money back later?’ Lloyd Davies adds: ‘The O’Neill commission says valuable new drugs will win the prize, but who will make that judgement and what is the formula for figuring that out?’

For his second big idea, O’Neill says that pharma should stump up the money for the innovation fund. The report notes: ‘Over five years, a fund of $2 billion would amount to 0.6% of the top 10 pharmaceutical companies’ global R&D spending; and less than one-tenth of a percent of their total revenues.’

‘This fund could help prime the pump and accelerate the flow of funds into an area that has been neglected,’ says Anderson. ‘Industry should play some contributory role but governments and other relevant bodies need to be involved too.’

‘The principle is interesting and compelling,’ says Lloyd Davies, ‘but industry cannot be mandated to pay in.’ The ABPI and Anderson both point to the EU’s Innovative Medicines Initiative (IMI) as a suitable model. The IMI is a public–private partnership, with the European commission and industry funding it, while industry contributes expertise and resources.

Some industry sources say the future is brighter without radical interventions. Analyst Alan Carr at Needham equity research says industry has increased activity in antibiotic R&D and predicts we can ‘expect to see more and more of these new antibiotics reaching the market. We are seeing industry step up already.’

Last year, five new antibiotics were approved in the US, but there has been debate over whether they are the right kind. Most of the seven new antibiotics approved since 2010 are against skin infections, says Outterson, mostly gram-positive infections. ‘Not the scary superbugs, the gram negatives, which all the experts are so worried out. We don’t need just new antibiotics. We need the right sort.’ Outterson adds that ‘an emblem of the establishment’ is saying we need to think of a radically different way to pay for antibiotics. ‘We shouldn’t be selling antibiotics in the way we sell cars and breakfast cereal.’