Antimicrobial resistance will kill 300 million by 2050 without action 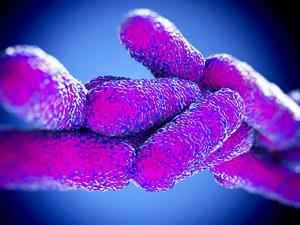 Antimicrobial drug resistance could be a huge problem by 2050

The true cost of antimicrobial resistance (AMR) will be 300 million premature deaths and up to $100 trillion (£64 trillion) lost to the global economy by 2050. This scenario is set out in a new report which looks to a future where drug resistance is not tackled between now and 2050.

The report predicts that the world’s GDP would be 0.5% smaller by 2020 and 1.4% smaller by 2030 with over 100 million premature deaths. The Review on Antimicrobial Resistance, chaired by Jim O’Neill, is significant in that it is a global review that seeks to quantify financial costs.

This issue goes beyond health policy and, on a strictly macroeconomic basis, it makes sense for governments to act now, the report argues. ‘One of the things that has been lacking is putting some pound signs in front of this problem,’ says Michael Head at the Farr institute, University College London, UK, who sees hope in how a response to HIV came about. ‘The world was slow to respond [to HIV], but when the costs were calculated the world leapt into action.’

He recently totted up R&D for infectious diseases in the UK and found gross underinvestment in antibacterial research: £102 million compared to a total of £2.6 billion.1 Other research shows that less than 1% of available research funds in the UK and Europe were spent on antibiotic research in 2008–2013. 2

RAND Europe and KPMG both assessed the future impact of AMR. They looked at a subset of drug resistant pathogens and the public health issues surrounding them for Klebsiella pneumonia, Escherichia coli, Staphylococcus aureus, HIV, tuberculosis and malaria. The RAND Europe scenario modelled what would happen if antimicrobial drug resistance rates rose to 100% after 15 years, while infection rates held steady. The KPMG scenario looked at resistance rising to 40% from today’s levels and the number of infections doubling. Malaria resistance results in the greatest number of fatalities, while E. coli resistance accounts for almost half the total economic impact as it is so widespread and its incidence is so high. 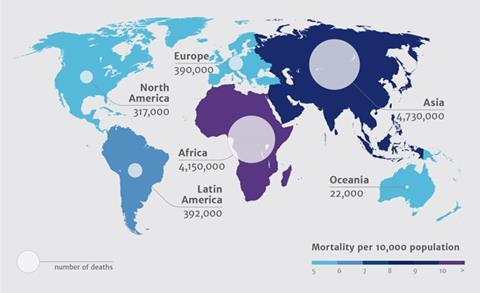 Deaths attributable to antimicrobial resistance every year by 2050

‘You can look at antibiotic resistance as a slow moving global train wreck, which will happen over the next 35 years,’ says health law expert Kevin Outterson at Boston University, US. ‘If we do nothing, this report shows us the likely magnitude of the costs.’

Outterson headed up a recent Chatham House report on new business models for antibiotics that highlighted the problem of inadequate market incentives. ‘If I came out with a new cardiovascular drug, it could be worth tens of billions of dollars a year,’ he says. ‘But if we had the same innovative product as an antibiotic, we would save it for the sickest and it would sell modestly in the first decade. So market uptake is extraordinarily limited for innovative antibiotics and all for excellent public health reasons.’

The solution is to de-link return on investment and volume sales. ‘Instead of companies getting their return on R&D investment by selling volumes of product, they would be paid something by governments or health players for access to that antibiotic,’ he explains. Outterson is now working on a report that will outline how this could work.

Another approach is to re-use old drugs. ‘Developing new antibiotics will take many years and we cannot wait,’ says Ursula Theuretzbacher at the Center for Anti-Infective Agents in Vienna, Austria. ‘In the meantime we decided we need to improve the usage of some selected old drugs that had not been in use for many years.’ An EU-funded project, AIDA, is running clinical trials on five drugs developed before the 1980s.

Theuretzbacher has been pleased by public money going into helping small companies move their innovative antibiotics towards market. In the US, companies such as Achaogen, Cempra and Trias, acquired by Cubist, itself just bought up by Merck, have made use of these schemes. Meanwhile, in Europe, there are several EU funded projects, Wellcome Trust schemes and public–private partnerships such as the Innovative Medicines Initiative and its New Drugs for Bad Bugs programme.

Anne Horan, from the Royal Society of Chemistry, said: ‘This report stresses the urgent need for co-ordinated global action to develop new antimicrobial drugs, alternative therapies and diagnostics. It also focuses strongly on the significant financial implications, estimating that the cost of taking no action will far outweigh any investment in fundamental research and innovation in developing solutions to tackle antimicrobial resistance.’

Richard Smith, health systems economist at the London School of Hygiene & Tropical Medicine, UK, was a member of the RAND team and adviser to KPMG. He says the report’s headline figures are not an exaggeration and are more likely an underestimate. ‘It takes into account effects on labour productivity and labour workforce issues, but we don’t know what the public reaction will be: from previous pandemics and outbreaks we know behavioural effects can be much worse on an economy than the impact of the disease,’ he says. The report concluded that they ‘most likely underestimate the true costs of AMR’ due to a lack of reliable data.

‘When we understand a threat, governments respond with energy and with money,’ Outterson says. The US recently agreed to put over $5 billion into fighting Ebola. ‘The threat posed by bacterial resistance is even greater than that of Ebola,’ he adds. ‘If this report accurately predicts the world we live in in 2050, then we will have failed on a monumental scale to preserve a global public good.’