Christopher Barton has been building rockets since he was 11, and began his career in the aerospace industry. However, he saw an opportunity to use carbon dioxide to create useful materials like silica, in a way that is cheaper and with a lower carbon footprint than current methods. ‘The logic was that CO2 is the most abundant, low cost potential feedstock in the world, and the business model should be profitable without relying on a carbon tax,’ Barton says. 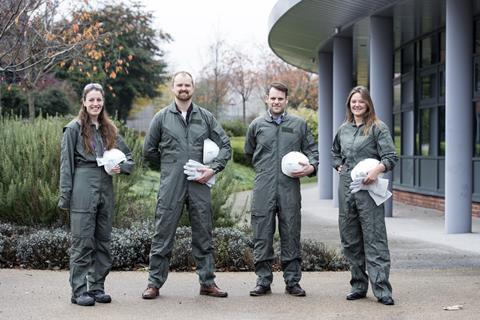 He set up Barton Blakeley at Rothamsted Research’s site in Harpenden, UK, because there is an anaerobic digester nearby that provides a good source of CO2, and Rothamsted could provide analytical support and other agricultural waste materials as potential feedstocks. The CO2 is blended into a fuel mixture, which is fed into the company’s Hyper Xi process reactor. Barton describes the reactor as similar to a rocket engine, albeit one designed to harness and control the hypergolic reaction going on inside, rather than to provide propulsion. ‘The joke that I make in the office is that we develop rockets to move the world… with zero thrust! Hyper Xi will not get you to space anytime soon.’

There are multiple reactions occurring in the reactor simultaneously, he explains. ‘That gives us the ability to break up the carbon dioxide.’ The oxygen from the CO2 combines with a metal to form various metal oxide powders, depending on the other fuels that are fed into the reactor. ‘The majority of the mass from the CO2 – the oxygen – is stored within the powder product.’ The carbon can be used to functionalise the end product, or distributed into other reaction products, many of which are valuable in their own right, or can be recycled to regenerate more of the fuel mixture, he says. 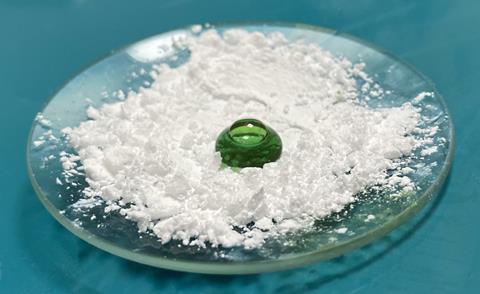 The comapny’s carbon converted silica incorporates oxygen from the CO2 feedstock in the silica itself, and carbon in the hydrophobic alkyl surface coating

The company has initially focused on silica as a cost-effective product with reasonably high demand. Tuning the reactor conditions can generate a variety of different grades and forms of silica. That includes a hydrophobic fumed silica covered in methyl or short alkyl groups – derived in part from the carbon from the CO2 in the fuel mixture. This kind of hydrophobic silica has a well-established market, but it is relatively expensive and energy-intensive to make. ‘We skip out quite a few of the energy-intensive and siloxane-based steps,’ Barton says, meaning that the overall carbon footprint of silica from the Hyper Xi process is significantly lower than current commercial production methods – compared against benchmarks from standard lifecycle analyses produced by the global silicones industry.

‘Fumed silica has a pretty huge carbon footprint – it’s about 30kg of CO2 equivalent per kilogram of material produced,’ says Barton. ‘If we buy in the fuel materials for our process – which is completely different and involves very different chemistry – you can quite comfortable halve that.’ Barton believes that accounting for recycling of the fuels and sourcing some of the inputs from waste materials like rice husk ash, or fabrication waste from the aerospace industry, could eventually bring that figure closer to a 90% reduction in carbon footprint. ‘That’s a huge reduction for something that’s a really fundamental material.’

Thermodynamically speaking, you can’t just claim that renewable energy is the solution to every problem

But Barton recognises that – for the company to be successful ­– the silica also needed to be cheaper than competitors. ‘At the end of the day, silica is a bulk, low margin product. Price increases, albeit with carbon capturing positives, would be a difficult sale. So there are two fundamental laws that we’re applying when we looked at the carbon conversion business model. The first is economics: the product cannot be more expensive. The second is thermodynamics: our process cannot cost energy.’

He notes that many previous carbon capture and utilisation technologies require significant energy inputs, and rely heavily on finding enough renewable energy to power them. ‘Thermodynamically speaking, you can’t do that. You can’t just claim that renewable energy is the solution to every problem,’ he says. By contrast, the energy inputs for the Hyper Xi process are mainly embedded in the fuel materials, and if they can be sourced from waste then the additional energy demand is pretty minimal.

The company has now built a larger, pilot-scale plant, with an aim to refine the process and prove its business model works. ‘It’s capable of consuming about 6 tonnes-worth of CO2 per year, and we’re expecting that to make about 3–4 tonnes of silica powder,’ explains Barton. Eventually, the aim is to attach bigger plants to large-scale CO2 emitters such as chemicals clusters and power plants, as a way to contribute to reducing the emissions from some of those industries. ‘We have the capability to have a kilotonne scale plant either in construction or completed within the next five years,’ he says. ‘Our plans are to go as high scale as quickly as possible. Mostly because, while a kilotonne plant is great, until it’s on a megatonne scale, it’s not really doing anything to help fix the planet.’

Hyper Xi technology has been nominated for the 2022 Earthshot prize, is a finalist in Shell’s New Energy Challenge 2022 and won the AgRIA Challenge in 2020