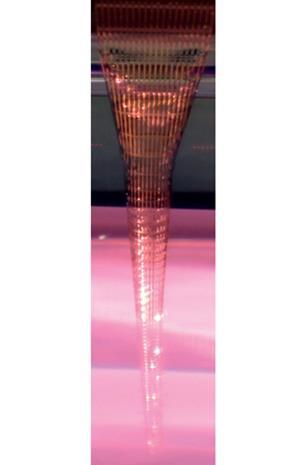 Ultra-flexible neural electrodes have been created that can more precisely measure brain activity without causing tissue scarring. Avoiding scarring allows electrodes to record neuron firing more accurately over longer periods of time, which will be useful for patients with chronic neurological conditions. By inserting these electrodes into a rat’s brain researchers were able to determine which neuron fired when a specific whisker twitched and results remained remarkably consistent over long periods of time.

Interfacing the brain with electronics is vital for doctors and researchers, enabling deep brain stimulation to treat Parkinson’s disease or monitor the activity of motor neurons for control of prostheses. However, conventional brain probes made from either metal or silicon materials are much stiffer than brain tissue. As the brain shifts during day-to-day movement, the probes can move within it, which can prevent the sensors from continuously sampling the same part of the brain. It can also lead to scarring. Other groups are also working on this problem and earlier this year scientists created injectable electronics that unfold within the brain.

Nanoscientist Charles Lieber and colleagues at Harvard University have fabricated a new type of electrode containing metal interconnects encased within a mesh of SU-8 – a photosensitive epoxy. They used conventional planar lithography, but they engineered positive strain into the polymer so that, when detached from the silicon wafer by etching away a sacrificial nickel layer, the electrodes curled up into tight cylinders with the sensors on the outside. The researchers froze these with liquid nitrogen to create needles rigid enough to penetrate brain tissue. When they melted inside the brain, they left sensor arrays up to seven orders of magnitude less stiff than conventional probes.

Immediately after insertion into the barrel cortex of an anaesthetised rat’s brain, which senses movements of the whiskers, the researchers tweaked a single whisker. Using their sensors, they could pin down the precise region of the cortex connected to that whisker. 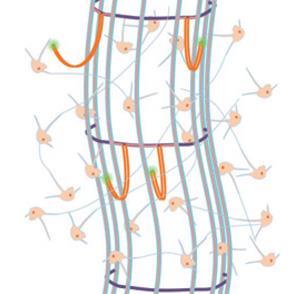 They left the probes in place for five weeks, and found that, at the end of this period, the probes had become well integrated, with neurons even growing inside their hollow cores. Lieber says that, in unpublished further work, the team has found that sensors pick up a consistent signal from the same neuron over long periods, showing that scar tissue does not form around the probes and interfere with the neurons.

‘This is a wonderful report,’ says neurotechnologist Leigh Hochberg of Massachusetts General Hospital and Brown University in Rhode Island, US. ‘These electrodes will likely become useful quickly, helping to better elucidate the neurophysiology of learning, memory, movement and how we perceive the world around us.’ Neuroscientist György Buzsáki of New York University, US, also praises the work, but he cautions that, in the current setup, most of the 13 sensors yielded no useful signal as they were not close enough to a neuron, so very few neurons were actually monitored.