Expanding industries in computing and cosmetics have led to higher salaries, while the gender pay gap has increased

A survey of chemists’ 2017 salaries carried out by the Royal Society of Chemistry (RSC) suggests those working in computing, IT, cosmetics and toiletries saw healthy salary increases last year, while other sectors were not so lucky. Meanwhile, the gender pay gap has increased slightly and men still dominate in positions of leadership. The RSC is to investigate the factors governing women’s career progression in the chemical sciences and report back by the end of this year.

The results suggest members’ annual salaries have gone up 1% since 2015, reaching a median salary of £45,000. Overall, most jobs have benefited from pay rises with the most notable boosts for those working in computer systems, and for those who are self-employed. However, members in academia, analysis, environmental monitoring, health and safety, and teaching have seen salaries fall. This may be because the average age for teachers and academics has declined, the survey notes. Similarly, more environmental monitoring and analyst roles are occupied by employees aged 35 or under.

By sector, salaries have decreased in petrochemicals, building and construction, and education and schools, perhaps due to fluctuating investment and declining growth over the past few years. Other sectors have expanded, such as computer and IT, and toiletries and cosmetics, explaining the increase in salaries in these sectors. The consultancy sector saw the largest average salary increase (£7000), and government the smallest (£600).

Women now earn on average £13,000 less than men, compared to £11,900 less in 2015. While earning potential generally increases with age and experience, this trend is less likely to apply to female survey respondents, the survey notes. 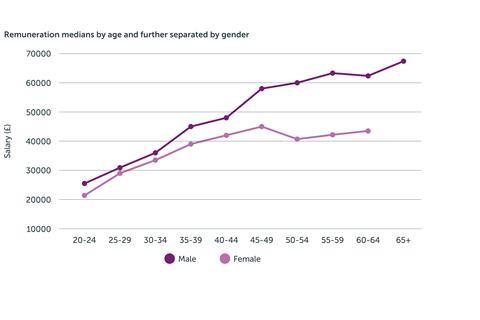 It also suggests that men and women have significantly different experiences of the workplace. Only 47% of women are satisfied with their whole remuneration package compared with 53% of men; 45% of women feel their pay is fair (54% of men); and 52% of women believe there are equal opportunities for all employees in their workplace (63% of men). Men still dominate positions of leadership: 40% of men and 23% of women are in positions of high responsibility.

‘There is a responsibility on all of us, particularly the senior people, to take ownership of this problem to make sure that we are not losing talented women from the pipeline,’ comments Emma Raven, head of the department of chemistry at the University of Leicester. ‘It is proving to be a very difficult problem to crack, but all the universities, learned societies and the research councils are working hard to fix this problem and I am optimistic for the future.’ She adds that there is a need for greater transparency.

Claire Carmalt, head of chemistry at University College, London, says that the recruitment process is key. Recruiters should make the process as inclusive as possible, and consider the gender balance of applicants, those shortlisted and those interviewed, and how this may be improved. There are fewer women in high responsibility roles, she says, partly because women are less likely to put themselves forward for promotion/pay reviews and often feel that they need skills development or training. ‘This is easily solved by having clear promotion strategies and support from line-managers. Leadership/training courses can also go some way to help women realise their full potential.’

Sheena Elliot is manager of member communities for the RSC. ‘I think that organisational pay-gap data is most meaningful when it is considered in the context of the different professions and roles within that organisation – and pay bands and gender differences associated with those roles. Our pay and reward survey will help employers with more meaningful understanding and benchmarking of their own data,’ she tells Chemistry World.