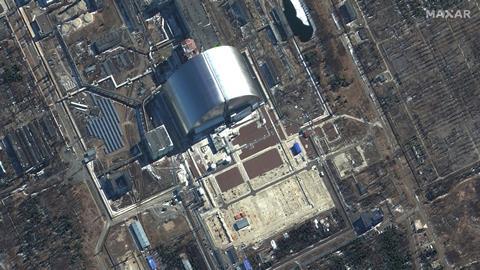 A day after Moscow promised to curb attacks on Ukrainian cities – a pledge that hasn’t been honoured yet – it seems that Russian forces are withdrawing from the decommissioned Chernobyl nuclear power plant. This is only a few days after looters apparently raided one of the site’s radiation monitoring labs, making off with radioactive material.

The site of the 1986 nuclear disaster doesn’t have any active reactors, but serves as Ukraine’s nuclear waste facility. Around 20,000 spent assemblies, each containing about 130kg of nuclear fuel, sit in water-filled cooling ponds. More are stored at underground facilities. The site also features an aircraft hangar-sized building covering the remains of the reactor that exploded in 1986. Both the ponds and the dome require electricity to keep the still radioactive material contained within safe.

After Russian troops first took charge of Chernobyl in late February, the plant had suffered a five-day-long blackout. Radiation monitoring, ventilation and lighting all had to be switched off to reduce demand on the backup diesel generators. 211 technical personnel were held at the site, working non-stop for almost a month until they were finally allowed to rotate on 21 March.

Now, according to the AFP, a US official said that Russia has started repositioning some of its troops, which appears to include moving them from Chernobyl into neighbouring Belarus. ‘We think that they are leaving, [but] I can’t tell you that they’re all gone.’ The International Atomic Energy Agency (IAEA) has confirmed that Russian troops have handed over control of Chernobyl with two troop convoys leaving the site and a third leaving the nearby town of Slavutych, where many of the plant’s workers live.

A few days earlier, Anatolii Nosovskyi, the director of the Institute for Safety Problems of Nuclear Power Plants, told Science that radioactive isotopes used to calibrate instruments, as well as pieces of radioactive waste, were stolen from one of Chernobyl’s labs. However, this is no cause for concern, nuclear engineer Bruno Merk from the University of Liverpool, UK, stated in New Scientist. The material isn’t the right type to make nuclear weapons. And it’s too little to be of use for making a dirty bomb – a device that combines radioactive material with conventional explosives.

The fate of ‘powerful sources of gamma and neutron radiation’ and samples from the destroyed reactor at another lab remain unknown as Nosovskyi said he has lost contact with the facility.

When Russian troops first entered the 30km-wide exclusion zone surrounding Chernobyl, sensors noted a 10-fold rise in gamma radiation. Experts speculated that this was likely due to heavy military vehicles kicking up clouds of radioactive dust – but it remains unclear exactly what happened.

Now, two Chernobyl staff told Reuters that they saw soldiers walking through the red forest not wearing any protective equipment. The forest is one of the world’s most contaminated areas. It is named after the colour of the pine trees that died as a result of the radiation released in 1986.

The soldiers ‘had no idea what kind of a facility they were at’, according to one Chernobyl employee. ‘When they were asked if they knew about the 1986 catastrophe … they did not have a clue.’

Another Chernobyl employee called entering the forest without protective gear ‘suicidal’ because of the risk of inhaling highly radioactive soil particles. According to Yaroslav Yemelianenko, who runs tourist trips into the exclusion zone, several Russian soldiers were taken to a hospital in Belarus. The IAEA said it was unable to confirm reports that Russian soldiers had received high doses of radiation.

The soldiers were likely only going in for a check-up as the radiation dose from walking unprotected through the forest is too low to lead to acute illness, radioactive materials researcher Claire Corkhill from the University of Sheffield, UK tweeted. Nuclear waste expert Cheryl Rofer estimated that it would likely take 57 years for a human to receive a lethal radiation dose in the area.