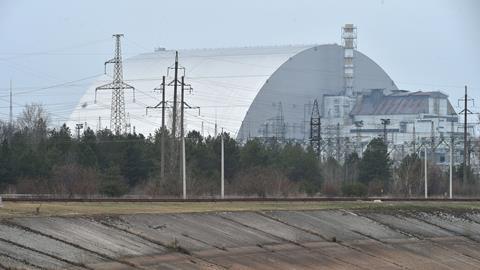 ‘Obviously, you don’t want nuclear reactors in the middle of a war. But here we are,’ says nuclear waste expert Cheryl Rofer on the situation in Ukraine. While reports of spiking radiation levels around the decommissioned Chernobyl power plant and missiles hitting two radioactive waste disposal sites don’t seem to be of immediate concern, they have shown how vulnerable other nuclear sites across the country remain to accidental – or intentional – damage.

‘So much can go wrong in this situation’, says Azby Brown, lead researcher for the citizen science organisation Safecast, which manages a global radiation data network. ‘A shell damaging a nuclear facility could be disastrous, could lead to a widespread release of radiation. The Russians’ behaviour is in violation of every procedure, every safety guideline, every international agreement, every agreement of the IAEA [International Atomic Energy Agency]. It is foolish to trust that they will behave in a way that preserves safety.’

Late last week, invading Russian forces seized the Chernobyl nuclear site. In 1986, an explosion in the plant’s number 4 reactor triggered a core meltdown, resulting in the worst nuclear disaster in history. The last of its surviving reactors stopped operating in 2000, but the plant and its surrounding 30km-wide exclusion zone remain one of the world’s most contaminated sites.

Controlling Chernobyl is unlikely to have military significance, but it is located on one of Russia’s main invasion routes close to the border with its ally, Belarus. As the Russian military entered the exclusion zone, some of the 50 sensors in the area started picking up a 10-fold rise in gamma radiation, with some of them spiking at 60 times higher than usual levels. According to the IAEA, these levels don’t pose a health risk over the one already present in the exclusion zone. But they left experts wondering what happened.

A breach in a nuclear waste containment facility could have resulted in such a spike, but ‘the general consensus was that vehicles resuspended radioactive earth and dust’, says Brown. The sensors have since stopped sending data. They were likely taken offline intentionally, Brown says. ‘Russia has done this before, in cases where there have been radiation releases that they wanted to somehow limit public knowledge of. If something else goes wrong, we may not know about it.’

There’s also concern for the thousands of scientists, engineers and plant operators working to decommission Chernobyl’s reactor 4, who are reportedly now being held hostage by Russian soldiers. ‘They should be able to operate that site without fear and with proper rest,’ says radioactive material degradation researcher Claire Corkhill from the University of Sheffield, UK. Staff also need to take regular leave outside the exclusion zone to moderate the amount of radiation they’re exposed to.

Since 2016, an aircraft hangar-sized building has been covering what remains of reactor 4, including the 100 tonnes of still highly radioactive uranium-rich fuel in its basement. Unlike the first confinement dome, hastily built after the accident, the new dome is a sophisticated, temperature-controlled structure created by a multinational collaboration. ‘If the air conditioning unit gets switched off, and [condensation] starts raining [down] again inside the reactor, then everything starts to corrode, and we’ve just wasted €1.2 billion (£1 billion) in trying to fix it,’ Corkhill says.

While the confinement dome can withstand extreme weather events, it hasn’t been built for war. Fortunately, the most dangerous radioactive material is located several metres underground. ‘I would imagine that would be very difficult to get out, even if there was a direct missile hit,’ says Corkhill.

There is also a danger that nuclear waste from all over the country that is stored in the exclusion zone could come under fire. Ukraine is dependent on atomic energy, with half of its electricity coming from its 15 nuclear reactors at four plants. The country is Europe’s second-biggest generator of nuclear power after France, so creates a significant amount of nuclear waste.

Two nuclear waste sites in Kyiv and Kharkiv already had close calls with missiles earlier this week. As both hold only low-level waste like medical isotopes and scientific waste, a breach would only release negligible amount of radioactivity, says Corkhill.

By contrast, high-level waste facilities might be more vulnerable. ‘We’re talking spent nuclear fuel that comes out of the reactors and is cooled in ponds, and then sent to a dry storage,’ Corkhill explains. If such a facility was hit, ‘it’s not going to be like Chernobyl again’, she says. ‘But that’s not to say that if a missile blew up on top of a spent fuel container that it wouldn’t be terrible. It would have the potential to disperse radioactive material in the environment.’

Certain radioactive isotopes like caesium-137 and iodine-131 would be the most problematic as they easily become airborne. However, there would only be small quantities of these elements, so any dispersion would likely remain local.

‘I think [the ponds are] probably the most vulnerable point of the reactors,’ says Rofer. They may contain freshly spent fuel that is still thermally and radioactively hot. They also need operators to ensure the water is circulated and they’re not running dry. ‘If the water evaporated, the fuel could overheat. I don’t think at this point, that is a big problem, but it’s certainly something to be avoided.’

The greatest risk might come from the war disrupting nuclear power plants. Although nuclear reactors are built to withstand an aircraft crashing into them, they need constant attention by operators. ‘What happens between the Ukrainian nuclear power operators deciding it’s not safe for them to come to work anymore, and any Russian nuclear operators taking over?’ asks Corkhill. ‘There would have to be a period of time where either the reactors were shut down, or there was a handover. If neither of those things happen, then we could be in trouble.’

While all of Ukraine’s plants are still operating, Russian forces are closing in on the largest one near Zaporizhzhya. According to Ukrainian state-owned nuclear power firm Energoatom, there are plans to shut down the reactors and unload their fuel in case of bombing in the area. All plants also have backup generators if they lost their external power supply. Nevertheless, IAEA director general Rafael Mariano Grossi said that he remains gravely concerned, appealing to the Russian government to avoid any action that could jeopardise plant safety. ‘In the fog of war, a lot can go wrong,’ says Brown.