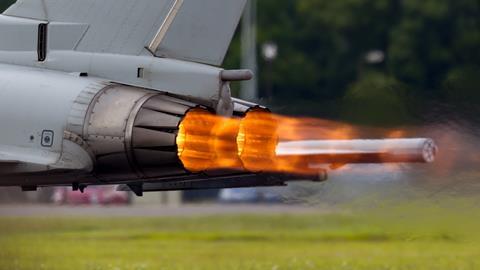 World’s militaries urged to account for their outsized carbon footprints

A group of environmental scientists and other researchers in the UK has issued a call for military carbon dioxide emissions to be included in global climate change mitigation efforts. Their commentary notes that the world’s militaries are significant contributors to greenhouse gases, with estimates suggesting they emit between 1% and 5% of global emissions. Although that figure is on par with the aviation and shipping industries, which stand at 2% each, militaries across the world are generally not required to report emissions.

‘This must change, or mitigation measures risk becoming mere guesswork,’ the researchers assert. They point out that if the US military was a country it would have the highest per capita carbon emissions in the world – 42 tonnes of carbon dioxide equivalent (CO2eq) per serving member. The US as a whole emits 15 CO2eq per person, the EU 6 CO2eq and the UK 5 CO2eq. However, the UK military is at 18 CO2eq, the data shows.

The commentary asserts that military emissions should be included on the global agenda and be officially recognised and accurately reported in national inventories. Military operations need to be decarbonised, and this requires not just a ‘greening’ of military infrastructure or equipment but also a concerted effort to reduce military spending on carbon-intensive programmes and equipment, the researchers argue.

Larbi Reuben, a research associate at Lancaster University’s environment centre in the UK and co-author of the call to action, explains that some sectors like the concrete and transportation industries have their own framework for tracking their emissions and reporting them, as well as roadmaps for decarbonising their activities. ‘We are saying that the militaries should also have a roadmap for decarbonising,’ he tells Chemistry World.

Reuben and colleagues call for greater investment in research into technologies that allow third parties, such as academics and civil society groups, to independently verify military emissions accounting without compromising national security. Such methods could address concerns that militaries will expose their operations if they openly declare their sources of emissions, Reuben adds.

He and the commentary’s other signatories point out that the UK has one of the best track records when it comes to reporting military carbon emissions. Since 2012, it has published data for direct emissions in the annexes of Ministry of Defence reports. In 2018, for instance, UK forces emitted around 2.7 million tonnes of CO2eq, roughly equivalent to emissions from 1.5 million UK cars.

However, in the figures reported to the UN Framework Convention on Climate Change in 2019, only 64% of the Ministry of Defence’s declared emissions were explicitly identified as belonging to the military – those relating to military aircraft and naval vessels. ‘It is unclear how emissions from military bases and ground vehicles were reported,’ and whether all bunker fuels used for international military transport were included in these figures, the researchers conclude. They suggest that further investigations could determine whether such emissions were listed as civilian emissions.

Bob Watson, an atmospheric chemist at the University of East Anglia in the UK who has contributed to multiple scientific assessments used to inform international and national policies, backs this latest call to action. ‘In principle all governments should count all emissions, hence they should include their military emissions,’ says Watson, a former chair of the Intergovernmental Panel on Climate Change (IPCC). ‘Net zero in 2050, means net zero including military emissions,’ he continues. ‘Hence, if military emissions continue past 2050 then governments will need negative emissions technologies to offset these emissions.’

The IPCC has concluded that there is a need for net zero emissions by 2050 to achieve the goal of the Paris agreement to limit global warming to 1.5°C compared with the pre-industrial era and avoid the worst impacts of climate change.