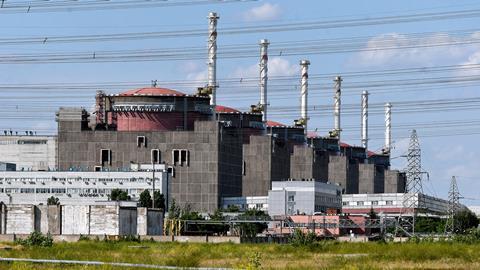 ‘The worst case is an accident like six times Fukushima,’ says Ukrainian nuclear safety expert Dmitry Gumenyuk. He is worried about the Zaporizhzhya power plant that fell into the hands of Russian troops 11 days ago. Although Gumenyuk describes the situation as stable for now, any military action that endangers the plant’s staff or damages the reactors’ cooling systems could have disastrous consequence – not just for Ukraine but for the rest of Europe, too.

With its six reactors, Zaporizhzhya is Europe’s biggest nuclear power station and among the 10 largest worldwide. It supplies one-fifth of Ukraine’s electricity. A few days after Russian troops captured the nearby city of Enerhodar, they ‘gathered a lot of tanks and guns in front of the power plant and started shooting at it’, says Gumenyuk, who advises the Ukrainian nuclear regulator on power plant safety. Two people were injured, a training building was hit and a localised fire broke out. ‘They didn’t damage any important systems, which is very fortunate,’ Gumenyuk says.

‘The shelling of a nuclear site is an alarming development, I hold the view that it is an exceptionally irresponsible thing to do,’ said Mark Foreman, a nuclear chemist at Chalmers University of Technology, Sweden. While modern reactors like the six at Zaporizhzhya can withstand the direct impact of a 10-tonne aircraft, ‘since our enemy uses missiles and air planes for bombings of our cities, I cannot provide you with a forecast on whether the nuclear power plants will be safe’, says Gumenyuk. Even small-scale weaponry attacks could be dangerous, causing damage to the external power supply or cooling systems.

Nuclear power plants need constant electricity supply to cool the reactors – even once they have been shut down. ‘You can’t just stop a nuclear power unit like you stop a pot of water from boiling by moving it off the hob,’ explains Gumenyuk. After shutdown, the fission products’ beta decay continues to generate heat – enough for the reactor core to reach unsafe temperatures within a few hours to days if not cooled properly.

If external power is cut and the diesel generators that serve as a backup fail or run empty, it could create a situation similar to that of Japan’s Fukushima Daiichi power plant in 2011, says Gumenyuk. Although Fukushima’s reactors automatically shut down after a nearby earthquake cut the plant off from its electricity supply, the backup power supply also failed when a tsunami flooded the buildings. Without its cooling system, three of the reactors experienced catastrophic meltdowns. The runaway reaction between superheated water and metal reactor components created enormous amount of hydrogen, which led to three explosions that released large amounts of radioactive material into the air.

A similar incident at Zaporizhzhya would be a disaster, says Gumenyuk. The radioactive contamination would be a problem not only for Ukraine but for the whole of Europe, he adds.

Two of Zaporizhzhya’s four high power lines are damaged, but the operator told the International Atomic Energy Agency (IAEA) that the plant’s power needs could be provided even with one power line. Diesel generators are ready to provide back-up power too. The country’s three other nuclear power plants have prepared for attacks by stocking up on diesel and at least one has been fortified with additional Ukrainian troops, Gumenyuk says.

Despite the grave situation, ‘the Ukrainian personnel do their best for the safe operation of the power plant’, Gumenyuk says. One of Zaporizhzhya’s reactors had already been shut down and staff shut down another two at the time of the Russian invasion. The plant’s management has since come under a Russian commander’s control, and representatives of the Russian state nuclear company Rosatom are present at the site.

Workers are likely under a lot of stress, Gumenyuk says, which means ‘there is very big probability of mistakes’. IAEA director general Rafael Grossi emphasised that the situation contravenes one of the seven pillars of nuclear safety, that staff ‘must have the capacity to make decisions free of undue pressure’.

While Zaporizhzhya’s occupiers have allowed staff rotation, the 211 technical personnel being held at the former Chernobyl nuclear power plant have been working non-stop for nearly three weeks. There are concerns about food reserves running low and living conditions as the facilities have no dedicated sleeping quarters.

After an initially alarming rise in radioactivity in Chernobyl’s exclusion zone, the situation at the site of the 1986 nuclear disaster has stabilised. But on 9 March, the plant lost its external electricity supply. According to Ukraine’s transmission system operator, the power lines were damaged by the occupying forces. Diesel generators started supplying backup power, but radiation monitoring, ventilation and lighting had to be switched off to reduce demand.

While a blackout at Chernobyl isn’t an immediate problem, it could become one over time – though not of catastrophic dimensions, says Gumenyuk. Chernobyl is the country’s main nuclear waste storage site. About 20,000 spent assemblies, each containing about 130kg of nuclear fuel, sit in water-filled pools. Power is needed to circulate the water and control the assemblies’ temperature as they still generate decay heat. Gumenyuk explains that as the water evaporates it carries with it radionuclides that will further contaminate the surrounding area.

On Sunday, Ukrainian specialist teams succeeded in repairing the power line and were in the process of reconnecting the plant to the grid. But staff at the plant reported that they had to stop maintaining safety-related equipment in part due to physical and psychological fatigue.

Russia’s motives for taking over Chernobyl and targeting nuclear plants remain opaque. The intelligence service of Ukraine’s ministry of defence claimed last week that Vladimir Putin plans to create a technological catastrophe at Chernobyl, which he would try to blame on Ukraine.

Former commissioner of the US Nuclear Regulatory Commission Jeffrey Merrifield suggested that controlling these facilities could be worth hundreds of millions of dollars to Putin’s economy. Ukraine had started to break away from its Russian nuclear suppliers and signed a $30 billion (£23 billion) deal with a US nuclear power company to build five additional nuclear units.