Counting charge on a single nanoparticle 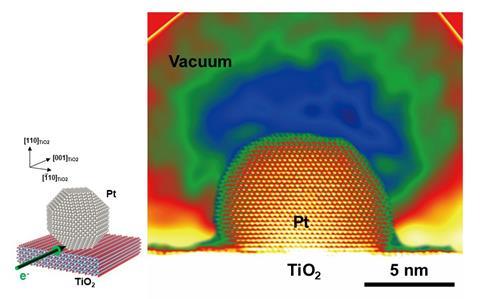 Researchers in Japan have developed a way to count the charge on a single nanoparticle. The technique is accurate down to a single electron, and could offer new insights into fundamental aspects of heterogeneous catalysis.

Many heterogeneous catalysts are composed of metal nanoparticles supported on a metal oxide surface. But interactions between the particle and the support structure can affect the material’s catalytic properties, for example charge transfer from the support to the nanoparticle can alter the way in which substrate molecules interact with the catalyst.

To better understand this effect, a team led by Ryotaro Aso from Kyushu University has developed a method for counting the charge on an individual nanoparticle. The technique is a form of electron holography, which is related to transmission electron microscopy, and enabled the researchers to measure the electrostatic potential inside and around single platinum nanoparticles on a titanium dioxide support with atomic-level precision.

The researchers note that being able to analyse the local charge state of supported metal catalysts is ‘critically important’ for understanding surface catalytic reactions. While the current study was carried out under vacuum conditions, they believe that the important next step will be to extend the technique so that it can work under a gas atmosphere.