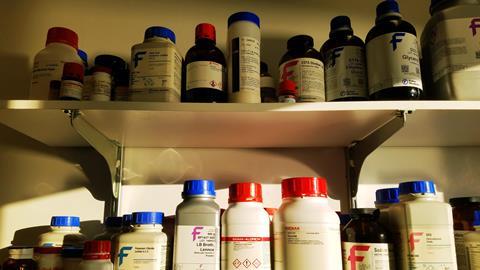 A new bond type called collective bonding has been discovered in well-known boron, aluminium, organolithium and organomagnesium compounds. In these molecules, there is little bonding between the central neighbouring atoms – their stability can only be explained by global interactions.

When chemists first made NaBH3– from the common reducing agent sodium borohydride, they immediately realised it had a rather unusual bond. They proposed a dative bond between Na− and BH3. Other researchers disagreed, suggesting an electron-sharing covalent bond instead.

But the sodium–boron bond turned out to be even weirder. It was later shown to have a combination of properties that had never been seen before. ‘I noticed that it is not as simple as covalent or dative or whatever kind of bond,’ recalls Cina Foroutan-Nejad from the Polish Academy of Sciences. ‘There was not an efficient interaction between sodium and boron – instead, there was interaction between sodium and hydrogens around the boron.’ 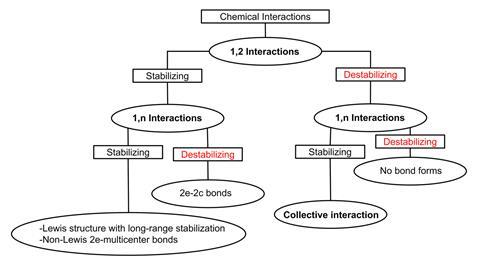 Where collective interactions fit in the hierarchy of bonding

A team around Foroutan-Nejad and Ángel Martín Pendás from Spain’s University of Oviedo has now discovered that NaBH3– is one of many similar compounds that feature a completely new type of bonding they call collective bonds. They also found collective bonds in many other species such as LiAlH3–, MgC(CN)3+, trifluoromethyl lithium (LiCF3) and trityl lithium (LiCPh3).

‘People think, usually, locally – this interacts with this and we have a bond,’ says Martín Pendás. ‘But sometimes, it is the full thing that [holds] the molecule together. It’s not that each bond is different from what is known, it is that you cannot break it into well-defined components.’ In NaBH3–, the direct interaction between sodium and boron provides little stabilisation and can even be destabilising. The molecule exists because of strong long-range interactions between sodium and the boron-bound hydrogen atoms.

Martín Pendás explains that their conclusions come from computational techniques that ‘do not depend on your initial idea of how to interpret the [molecules’] wave function’. Their computations ‘are not imposing [our] chemical thinking into the molecules’, Foroutan-Nejad adds. Instead of separating the molecule into components and seeing how they interact, ‘we can look into the atomic contribution, we can say which atoms are interacting with each other’.

Silvia Carlotto, whose research at the University of Padua in Italy involves computational bond analysis, praises the team’s state-of-the-art computational methods, saying ‘there are not more complicated or more detailed studies that could be done’.

She describes the interaction as ‘one bond between one atom and all the other parts of the molecule’ rather than a single bond between one atom and another. But Carlotto isn’t sure about calling it a new bond type. ‘The interactions are electrostatic or covalent in nature, so from this point of view it is not a completely new bond. But [the way] in which these conventional bonds are combined in the molecule is different.’ It goes to show that ‘some molecules are really complex and cannot be described with the simple conventional descriptors’, she says.

Bonds remain tricky to define despite being the basic unit of chemistry. Researchers such as crystal engineers ‘know how to assemble different molecules just using those ideas about electrostatic potentials, hydrogen bonding – these kinds of things that do not exist in the end, but that help us build new things’, Martín Pendás says. ‘Without those ideas, you don’t know what will happen.’