Science a priority for Indian government in latest budget

The Indian government has proposed a budget for the next fiscal year that will push up spending in most areas of science and research. Plans are also in the works to create 20 world-class teaching and research institutions in India in the coming years. 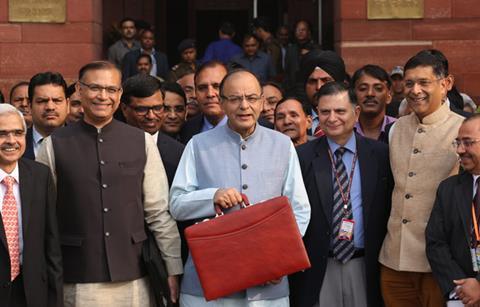 India's finance minister Arun Jaitley presents the 2016â€“2017 budget, which will increase funding for science, technology and the

Funding for the broad category of science, technology and the environment is set to rise 16% on last year to INR209 billion (£2.2 billion). But nearly a third of that increase is likely to be lost to India’s current inflation rate of 5%.

Solar energy research – a key focus of prime minister Narendra Modi’s government – is among the biggest winners in the proposed budget, with the renewable energy ministry allocated INR142 billion, more than double current funding levels. The huge funding increase comes after India and France launched the International Solar Alliance to boost the uptake of solar energy in developing countries in November last year.

India’s science community seems to be – on the whole – pleased by the proposed funding for science, although many scientists feel that far higher spending levels would be needed for Indian research to truly flourish. ‘The 2016–2017 budget for science seems satisfactory,’ says C N R Rao, honorary president and Linus Pauling research professor at Jawaharlal Nehru Centre for Advanced Scientific Research in Bangalore. Rao notes that there is ‘a slight increase in budget for science done by individuals’, but tells Chemistry World: ‘We need much more to really improve the infrastructure and facilities of some of our institutions to levels that prevail in advanced countries.’

Funding for the chemicals and fertiliser ministry should rise to INR43 billion, up 9%. Within that ministry, funding for the pharmaceutical department will rise 6% to INR1.6 billion. India’s pharmaceutical industry has expressed concern about a proposal in the budget to reduce tax relief on research and development expenses next year from 200% to 150%, followed by a further reduction in 2020 to 100%.

The budget also calls for ‘regulatory architecture’ to help make 10 public and 10 private Indian institutions into world-leading centres of teaching and research. The budget does not provide any further details, however.

‘It is not clear how one is going to pick 20 universities,’ Rao says, adding that India already has some ‘quite good’ institutions, such as the Indian Institute of Science, Tata Institute of Fundamental Research, Indian Institute of Technology Bombay and the Jawaharlal Nehru Centre for Advanced Scientific Research. ‘The investment required to create world class institutes is high,’ he says. ‘It also requires careful planning and sound administration. The nature of support to 20 universities being planned is not clear. This has to be done carefully.’