The usefulness of a tool designed to visualise and quantify ribonucleic acids (RNAs) in living cells has been questioned.1 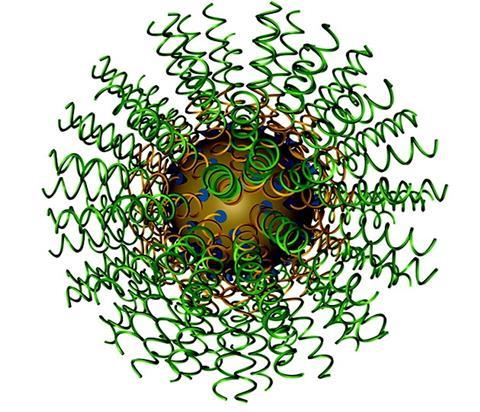 Source: Reprinted with permission from Joshua I. Cutler, Evelyn Auyeung, and Chad A. Mirkin, Journal of the American Chemical Society

A spherical nucleic acid, the technology that SmartFlares are based on, consist of an inorganic nanoparticle core joined to oligonucleotides. The technology is based around the idea that specific oligonucleotides can be used to signal the presence of targeted complementary RNAs

According to a new study, SmartFlares – probes that are meant to detect RNA within living cells that are marketed by the firm Merck Millipore – may not live up to their claims. Conventional RNA detection has been performed by evaluating lysed or fixed cells, but detecting RNA in live cells using fluorescence, as promised by SmartFlares, would provide more physiologically relevant information.

The probes, which consist of oligonucleotide sequences complementary to a target RNA that are bound to gold nanoparticles, were thought to be a game-changer by some researchers when they came onto the market in 2013. But since then, the tool has come in for criticism from some scientists.

Joanna Bereta, a biochemist at the Jagiellonian University in Kraków, Poland, who co-authored the paper, says the probes are a ‘good idea’ but can’t work as proposed. This, she says, is because it’s not clear how the probes exit vesicles after they are internalised by cells through endocytosis. Bereta believes the probes are trapped within vesicles after endocytosis and that this rules out any contact with RNA, which is principally found in the cytoplasm of living cells.

‘We hope that our contribution to the discussion about SmartFlares (and spherical nucleic acids in general) will help other scientists decide whether to spend their time and money working with this technology, which in our opinion is both questionable and unconvincing,’ write Bereta and her co-author Maria Czarnek in a blog post.

Bereta and Czarnek’s blog post, which also outlines the difficulty in getting their critique published in a journal, appears on the blog of Raphaël Lévy, a bionanoscientist at the University of Liverpool, UK, who is a long-standing critic of SmartFlares. Bereta says she originally wanted to use SmartFlares in her research, but felt it was her duty to inform the scientific community after discovering that they didn’t work for her group.

Bereta and Czarnek’s paper is ‘entirely accurate’, says Luke Armstrong, who worked on SmartFlare applications and development at Merck Millipore in California between 2012 and 2013. ‘I found that the signal that SmartFlares generated in live cells had nothing at all to do with levels of messenger RNAs,’ he says. ‘I concluded that there was no hope for that technology for live cell RNA detection,’ adds Armstrong, now associate director of cell and molecular biology at Charles River Laboratories in Cleveland, Ohio.

Armstrong notes that Merck Millipore now only sells around 20 SmartFlare-related products on its site. At one point, he says, the firm offered around 1700 such products.

But Chad Mirkin, a chemist at Northwestern University in the US, who developed the precursor to SmartFlares, nanoflares, pointed Chemistry World to more than 30 papers, which, he says, have successfully used the technology.

Chemistry World contacted a number of groups that have used SmartFlares. Hirendranath Banerjee, a molecular biologist at Elizabeth City State University in North Carolina, describes SmartFlares as a ‘very novel and effective technique’, noting that it has been helpful in evaluating gene expression experiments in his lab.2 Gulnara Zakiryanova of the Scientific and Technological Park Al-Farabi Kazakh National University in Kazakhstan also says she found SmartFlares to be useful in her work.3

Mirkin says that ‘there is no question that both nanoflares and SmartFlares work in many systems’, noting that Bereta and Czarnek’s paper ‘isn’t an indictment of the technology, but rather at most Millipore’s QC process’. Mirkin says that these issues are ‘growing pains for a powerful but somewhat complicated technology’ that will be ironed out in time.