A new kind of luminescent nanoparticle equipped to highlight inflammation, track disease progression and combat cancerous tumours does so without the need for outside light, offering an improved method of spotting and treating inflammatory-based diseases and disorders.

Nanoparticles as probes for luminescence imaging are a simple, fast and cheap way of detecting inflammation, a common hallmark of cancer. Despite this, several key issues still remain with current nanoprobes. They tend not to be easily absorbed into and distributed through tumour tissue after intravenous delivery, which is fine for laboratory analysis, but less useful for diagnosis and treatment in vivo. They are also usually activated by an external light, which limits their use to tumours close to the skin surface. 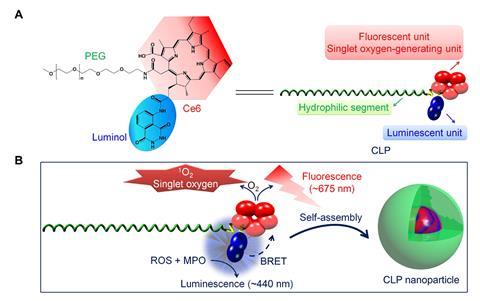 The particle self-assembles from a molecule that includes a light-activated chlorin ring, luminol and poyethylene glycol to form a shell.

A new self-assembling luminescent nanoparticle developed by a research team in China and the US, led by Jianxiang Zhang of the Third Military Medical University in Chongqing, could overcome these barriers. The team’s particles emit light in the presence of high levels of reactive oxygen species (ROS) and myeloperoxidase (MPO) that surround tumours. That light can be used for imaging, but also triggers generation of highly reactive singlet oxygen, which can attack the tumour itself.

The molecular component of the particles is composed of three parts – a light-sensitive chlorin e6 (Ce6) ring, luminol and a polyethylene glycol (PEG) ‘tail’ – all bonded together to make what the team calls a CLP conjugate. This can self-assemble into nanoparticles once inside the body, with a core of chlorin and luminol parts inside a shell of PEG.

Once inside a tumour, chlorite ions (ClO–) generated by MPO cause the luminol in the nanoparticle to luminesce. Then, through bioluminescence resonance energy transfer (BRET) the luminescence excites Ce6, which fluoresces and produces singlet oxygen. The combination of luminescence and fluorescence allows for sensitive high-quality imaging at tissue depths that wouldn’t be reached by external light. 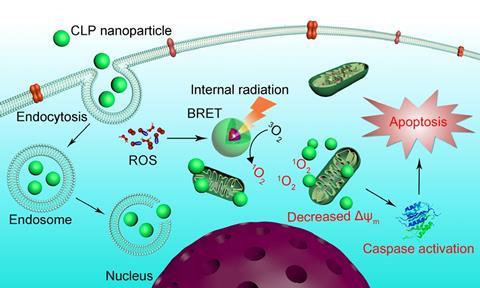 The nanoparticles are transported into tumour cells, where the high concentration of reactive oxygen species activates luminol fluorescence, which stimulates the chlorin ring to fluoresce and produce singlet oxygen, which leads to cell death

‘CLP was designed in view of its three components having good biosafety in addition to their synergistic functions,’ Zhang explains. ‘Most importantly, BRET between luminol and Ce6 is theoretically reasonable. Accordingly, we can predict good luminescence imaging and antitumour activity of our CLP nanoparticles.’

In mouse studies, the CLP nanoparticle effectively inhibited tumour growth without noticeable side effects or toxicity. Zhang’s team also showed that the nanoparticles can be used to monitor the disease activity of ulcerative colitis, and image other inflammatory diseases associated with ROS and MPO.

Nanomedicine researcher Qingxin Mu from the University of Washington, US, is impressed with the nanoparticle’s ‘remarkable’ self-luminescence and clinical potential as well as its multitasking capability. ‘It looks like an all-in-one design that can deal with multiple disease states or even their combinations,’ he says, but notes that a smaller nanoparticle size of less than 100nm would be preferable to improve in vivo efficacy further.