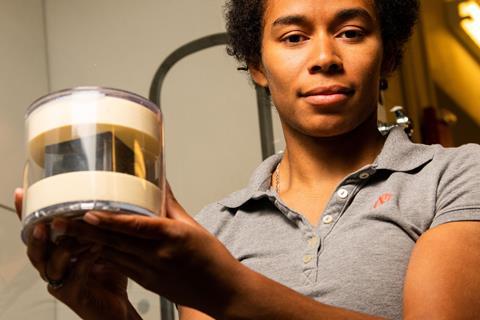 Brittany Robertson with PNNL’s cube, which is in a protective case

After allied forces seized the uranium cubes that Nazi Germany was using to develop its nuclear technology during the second world war, thereby ensuring that programme did not succeed, most of them were lost to history. Only about a dozen of them remain today, at a few institutions like Pacific Northwest National Laboratory (PNNL) in Washington state, US. Now, researchers there are using modern nuclear forensics techniques to date these cubes and prove that they did indeed come from Germany’s failed second world war nuclear programme. They are also testing their coatings, which were applied to limit oxidation, to discover where they were created.

Of the 1000 to 1200 uranium cubes produced by the research groups of Werner Heisenberg at the University of Berlin and Kurt Diebner in Gottow over 80 years ago, more than 600 were shipped to the US. Nobody really knows how these materials ended up where they did, including at PNNL, but scientists there are working to confirm their authenticity and learn more about them. Brittany Robertson, a PhD student at PNNL who is involved with the project, presented the work at a virtual conference of the American Chemical Society.

Robertson is adapting a radiochronometry procedure – which measures radioactive materials and their decay products – to better separate and quantify elements in the uranium cubes and more accurately determine their age. She is also refining this method to analyse rare-earth element impurities in the cubes, which could indicate where the original uranium was mined and whether it was produced for the Heisenberg or Diebner group, or both.

‘It is our intention here to use this fun project to really hone some of the new methodologies for nuclear forensic science, in hopes that those techniques go on to be applied to real nuclear forensic investigations,’ said principal investigator, Jon Schwantes, who leads PNNL’s nuclear and radiochemistry team. The team hopes that this technology can eventually be used to address illegal trafficking of nuclear material, as well as to corroborate historical claims.

For the project, Schwantes had a sample from the uranium cube housed at PNNL, which the lab has been using to train international border guards and others to detect nuclear material. But his research required access to additional cubes from this era, and Timothy Koeth, a material scientist at the University Maryland, who collects nuclear memorabilia, provided samples from two others.

These 125cm3 cubes, which weigh just under 2.5kg, are doubly encapsulated in plexiglass and have foam spacers to prevent unwanted exposure to radioactive material.

After analysing the surface coating on one of the cubes, Schwantes’ team has confirmed that it was likely made during the second world war. In addition, the researchers found styrene in the uranium flakes that were removed from that cube’s surface layers, which indicates that it was at least at some point part of Diebner’s programme.

Heisenberg used a cyanide-based coating to prevent oxidation of his cube, while Diebner used a styrene-based coating. The PNNL team is currently performing extractions on the other two cubes, and measurements are imminent.

‘I thought it was kind of a longshot that the coating would be detectable,’ Robertson recalled. ‘I didn’t think that an organic would last sitting next to uranium metal all of these decades and still be detectable.’

Although excited by the results this research is yielding, Robertson said it is ‘somewhat surreal and somewhat intimidating’ to work with these cubes, which are linked to such a horrific time in history.

‘It is kind of weird when putting the word “Nazi” in some of our writings, because it just feels so bad,’ she stated. ‘But at the same time, it is kind of neat to be able to hold this material in my hands because had they been successful it would probably be really radioactive and I wouldn’t be able to touch it, but also the world would be a very different place.’