Uranium and thorium make their debut in dual aromatic–antiaromatic molecule 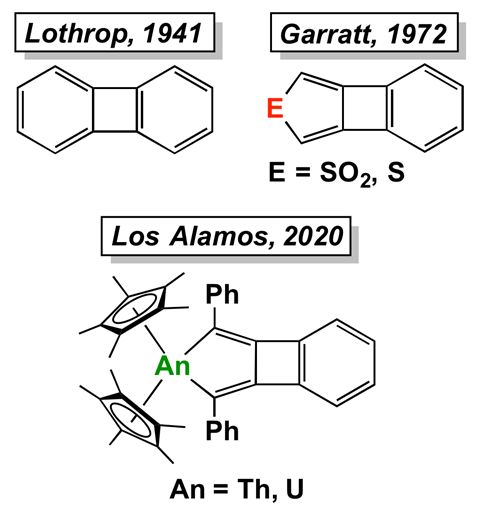 Known analogues of biphenylene. The actinide compounds reported here are the first of their kind

The first metallabiphenylenes – molecules that have both aromatic and antiaromatic rings – have been made by chemists in the US. One of the compounds contains a uranium, the other a thorium atom.

Biphenylene was first synthesised in 1941. It consists of two – aromatic – benzene rings fused on opposite sides of a central cyclobutadiene ring, which is antiaromatic, according to Hückel’s rule. A few sulfur analogues, in which one of the benzene rings is replaced with a sulfur-containing five-membered ring, exist.

A team led by Jaqueline Kiplinger at Los Alamos National Laboratory has now made two actinide metallabiphenylenes. Both the red–brown uranium complex and the bright yellow thorium derivative were synthesised by combining dicyclopentadiene complexes of the metals with potassium graphite, an extremely strong reducing agent.

Despite the fact that the actinides distort the central cyclobutadiene’s structure – the central ring contains a highly elongated carbon–carbon bond – it remains antiaromatic. Calculations also showed that the benzene ring retains its aromatic character.