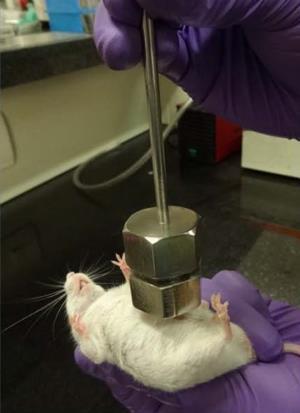 Scientists in India have developed a shock wave-based drug delivery system that could be used to administer insulin in diabetic patients and reduce the need for painful injections. A similar strategy could also increase the efficacy of antibiotic treatment to diabetic wounds.

In recent years, stimuli responsive drug delivery systems have come to the fore. Such systems enable greater control over where and when drugs are released in the body, ultimately providing more localised and sustained treatment with better overall results. Systems that are responsive to external stimuli such as ultrasound, infrared light and magnetic fields have all been reported, but often require specialist equipment that can be expensive to buy or difficult to operate, and this has limited their application in real clinical situations.

Now, Dipshikha Chakravortty and colleagues from the Indian Institute of Science in Bangalore have developed an ingeniously simple delivery system that uses micro-shock waves to stimulate drug release. The system makes use of microcapsules synthesised from the biocompatible polymers spermidine and dextran sulphate. At physiological pH and temperature, these microparticles are stable, but when they are exposed to shock waves, the resulting increase in pressure triggers the slow release of whatever drug is loaded inside.

The system has the potential to be used for the treatment of a wide range of conditions, from bacterial infections to cancer, but the real inspiration behind the study was for the treatment of diabetes. ‘We understood the discomfort faced by diabetic patients who take regular insulin injections and wanted to develop a technology to reduce their distress,’ says Chakravortty. The microcapsules developed by the team can be loaded with insulin and injected subcutaneously under the skin. Insulin release can then be triggered as and when it is needed by shock waves that can be generated externally using a small controlled explosion inside a hand-held shock wave generator. Although initial injection of the capsules is still needed, the number of injections required would certainly be reduced, and ‘remotely triggering the drug release from an already administered drug delivery system could increase patient compliance, and would be of great advantage in the case of mentally disabled patients and children,’ Chakaravortty claims. 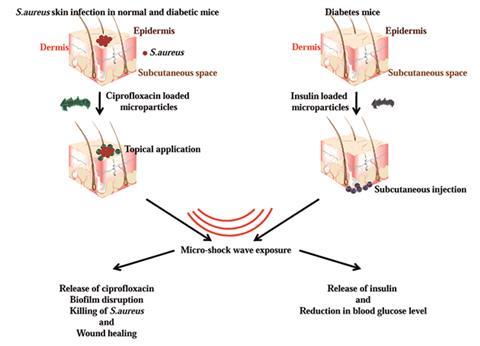 In a parallel experiment, the team demonstrated that ciprofloxacin released from the microparticles upon exposure to micro-shock waves could rescue diabetic mice from a superficial Staphylococcus aureus skin infection. This was not the case when micro-shock waves were not used and is thought to be because they promote bacterial biofilm disruption, wound healing and angiogenesis.

Cameron Alexander, an expert in drug delivery systems from the University of Nottingham, UK, is cautiously optimistic about the work. ‘The data is interesting, and this may be a promising new method for triggered drug delivery at surface and near-surface sites, but further work will be needed to demonstrate efficacy in diseased tissue inside the body,’ says Alexander.

Chakaravortty’s team are now working to eliminate the need for explosives in their hand-held shock wave generator.