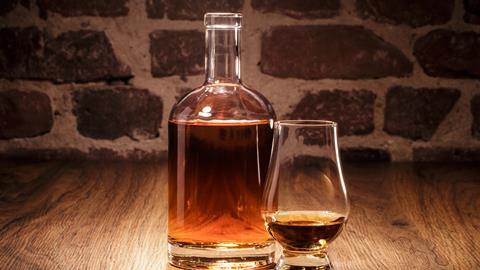 Every barrel of whisky is unique, its colour and flavour based on a host of variables that distillers want to be able to replicate. Now chemists at the University of Glasgow have used gold nanoparticles to measure how whisky is maturing, which they think will help distillers understand how individual casks are ageing and when they’re ready for bottling.

Residual compounds can be found in whisky such as esters, aldehydes and ketones, and the alcohol also dissolves chemicals from the wooden casks it is matured in. So, to ensure the consistency of their products, distillers use experienced master blenders, who regularly sample the casks to check if the whisky is ready to be blended, bottled and sold. This is a time-consuming and somewhat subjective process.

Currently, the maturity of whisky can only be gauged analytically by techniques such as GC-MS, but these are rarely available on distillery warehouse floors. These tools can quantitatively measure amounts of specific chemicals, such as acetaldehyde and furfural, but they are also costly and require skilled operators.

Will Peveler, the study’s lead author, says his team approached the Scotch Whisky Research Institute (SWRI) in Edinburgh to see if they could help each other. ‘We wondered: if you mix whisky and this gold salt that we use – chloroauric acid – will we get gold nanoparticles?’ Peveler recounts. The researchers assembled a collection of samples from 15 different whiskies distilled in Scotland, Japan and the US, and SWRI provided multiple samples taken at regular six-month intervals from a single cask over a six-year period. 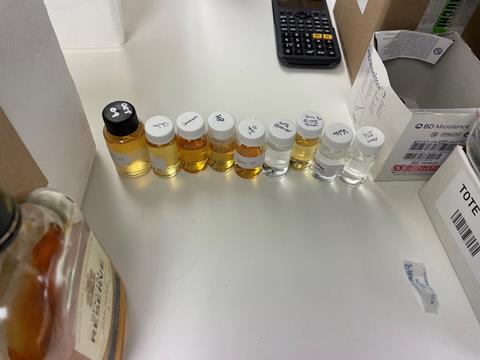 Source: © Will Peveler and Jenny Gracie, University of Glasgow

When Peveler’s team mixed the samples with the gold salt, the result was a bright red colour that indicated the formation of nanoparticles. ‘You’ve got this really clear trend: the longer the whisky had been in contact with the wood, the more gold nanoparticles were formed, the quicker they formed, and the stronger the red colour appeared,’ Peveler recalls.

He and his colleagues think that the carbonyl complexes in the whisky act as reductants, reducing the gold(III) salts to gold metal. The gold atoms then clump together to form nanoparticles, which have a distinctive red colour because nanocrystalline gold interacts very strongly with light, absorbing and scattering green light to appear red to the eye.

When a gold salt was added to whiskies gold nanoparticles formed. The more mature and better aged the whisky the brighter the red – the team believe a variety of reductants are responsible for this colour change

‘We conclude that age is not just a number, that the chemical fingerprint of key flavour compounds is a useful marker for determining whisky “age”, and that our simple reduction assay could assist in defining the aged character of a whisky and become a useful future tool on the warehouse floor,’ the researchers write.

They are now hoping to develop a simple piece of kit for distillers to measure the maturity of their whiskies without having to send samples away. This portable unit might be based around an LED and smartphone app. The team estimates this would cost less than a penny per test.

Jean-François Masson, an analytical chemist at the University of Montreal in Canada, calls the research ‘a beautiful piece of work’. Masson, who was not involved in this research, says the technology that the Glasgow team is proposing could really help food and drink producers. ‘It’s simple, it does not require any complex instrumentation, it’s easily handled by novice users and most distilleries do not have chemists at hand,’ Masson notes. ‘The test they have developed will tell you about how many organics you’ve extracted from the casks, and it’s an indication of how deep the flavours will be,’ Masson explains.

Greg Miller, a chemical engineer at University of California, Davis who is also a licensed distiller and whisky enthusiast, is more sceptical. ‘Flavour is multi-dimensional, and this colourimetric test is essentially one-dimensional,’ Miller states, noting that no more than three or four metrics can be extracted from the assay. ‘That’s a very blunt instrument compared to your nose.’

He adds that the phenomenon the researchers have discovered is ‘very narrow’ and likely only measuring the properties of the wood in the casks that hold the spirit. Miller adds that it completely ignores the fingerprint that distillation or the choice of grains introduce to the spirit.