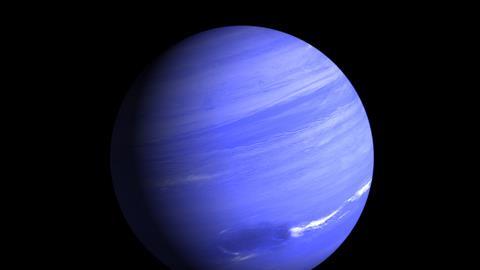 New experimental evidence that, at high temperature and extreme pressure, water can form a superionic state with both solid and liquid features has been obtained by US researchers. The results, which back up a 30-year-old prediction, could help explain the interior dynamics and magnetic fields of the icy giant planets, and may also be important for understanding some exoplanets.

Since 1988, increasingly sophisticated computational models have suggested that ice heated at high pressures, but not to its melting point – which is nearly 5000°C at 200GPa, enters an ionically-conductive superionic state. In this state delocalised hydrogen ions flow through an ordered oxygen lattice. ‘Nobody was able to really identify whether it was a true prediction or just an artefact from the simulations,’ explains experimental physicist Marius Millot.

The problem, explains Millot, is that compressing a material until the protons are freed produces ‘essentially a perfect acid that will eat into your containing device’, making the resulting substance almost impossible to analyse. Shockwave compression solves this problem, but the sudden compression heats the material past the ice’s melting point, producing a conductive fluid. Previously, researchers such as Harvard University’s William Nellis have reached the pressure–temperature regime in which water is predicted to be superionic using multiple shocks, establishing that the electrical conductivity more than quadruples as the pressure rises from 70 to 180GPa. However, it remained unclear whether this conductivity was due to delocalised protons or free electrons. 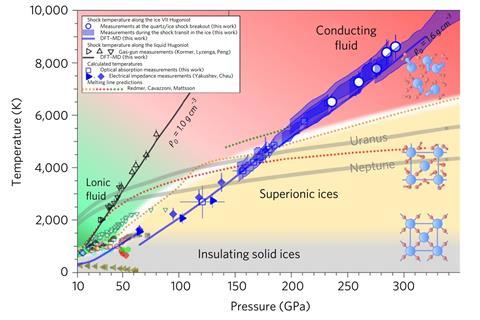 In the new research, the Lawrence Livermore team used a technique they had developed previously, compressing ice into a high density phase using a diamond anvil cell before applying individual shocks to increase the pressure further into the supposedly superionic regime. Simultaneously, they used a laser to measure the ice’s optical reflectivity, which allowed them to calculate its conductivity. They found that electronic conductivity stayed low at pressures below 240GPa – implying that the increased electrical conductivity must be due to superionicity. They also measured several other properties to confirm their findings.

The results could provide important insights into the complex, mysterious magnetic fields on Neptune and Uranus, which Nasa’s Voyager 2 probe found to be quite different from the simple dipolar fields on Earth and other planets. ‘One hypothesis is that there is a mostly insulating interior and the magnetic field is generated in a dynamo that is only active in an outer shell of conducting fluid,’ explains Millot. ‘It would be interesting to see accurate simulations of the fields of Neptune and Uranus using the property that the inside might be superionic.’ The work could also have implications beyond the solar system, as numerous exoplanets discovered so far appear similar to Uranus and Neptune.

Nellis says the researchers report the results of ‘extensive, well-chosen experiments and computations in the thermodynamic region of interest’ but he is not completely convinced by their conclusion. Uncertainties in both the experimental measurements and the calculated predictions, he says, remain ‘major concerns in demonstrating the existence of superionic water’. Theoretical physicist Ronald Redmer agrees that, although the work is ’strong experimental evidence for the existence of the superionic phase, direct evidence has not yet been achieved’. The ultimate proof, he says, would be to perform the compression procedure in an x-ray free electron laser facility to monitor the x-ray diffraction of the sample. ’I can imagine, for example, that at [the Linac Coherent Light Source] in Stanford or the new European XFEL in Hamburg – which just started operation last year – such a benchmark experiment could be performed,’ he says.