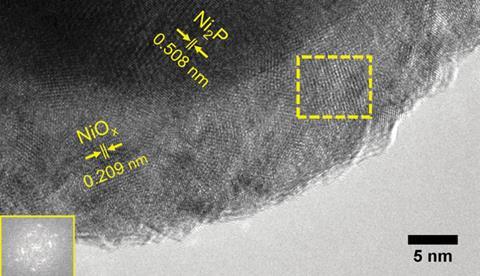 Scientists in Switzerland have shown that a nickel catalyst, capable of hydrogen evolution, can also stably generate oxygen at low overpotentials in alkaline solution. This surprising bifunctionality could allow for cheap sustainable fuel generation for future energy needs.

Electrochemical water splitting generates hydrogen and oxygen from water and could be an efficient renewable energy supply method. Typically, one catalyst evolves hydrogen while a different catalyst evolves oxygen. Requiring two catalysts in this way limits the simplicity and ease of the process since both may require separate optimisation and device integration. Catalysts that can perform both reactions exist but such Janus catalysts are uncommon. However, Xile Hu and his group at the Swiss Federal Institute of Technology in Lausanne have shown that nickel phosphide, as well as evolving hydrogen, can also be an effective oxygen evolution catalyst.

By loading nickel phosphide nanoparticles onto a carbon electrode they observed powerful oxygen evolution, generating a current density of 10mA/cm2, at an overpotential of only 0.29V, in potassium hydroxide, better than many state-of-the-art materials and the commercially used iridium oxide. Under these conditions the material adopts a core–shell structure where the nickel phosphide core is encased in an active nickel oxide species. Hu hypothesised that the nickel phosphide acts as conducting support, providing an electron pathway for the shell and boosting the catalytic activity.

To demonstrate the catalyst’s bifunctionality the team constructed an alkaline electrolyser using nickel phosphide for both hydrogen and oxygen evolution reactions; they successfully split water into its constituent elements with a current density of 10mA/cm2 and at a low water splitting potential of 1.63V.

Hu expects these findings to draw attention from the water-splitting community. ‘You can imagine that people will now try all kinds of metal phosphide compositions to fully develop this idea, so I think there are certainly going to be follow-up activities from other groups.’

Charles Dismukes, an expert in water splitting at Rutgers University in the US, also sees potential: ‘The ease of synthesis and bifunctional catalytic properties are promising for a future application of this technology.’ His research colleague at Rutgers Anders Laursen agrees: ‘Transition metal phosphides have garnered considerable attention in the last two years due to their unusually high electrochemical hydrogen evolution activity. Such catalysts combined with a suitably chosen semiconductor may allow for cheap sustainable fuel generation in the future.’