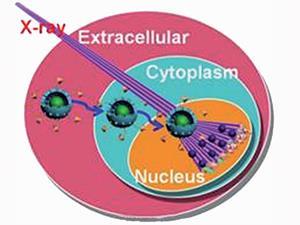 Scientists in China have developed an intelligent nanoparticle system that delivers a chemotherapeutic and radiosensitiser drug directly to the nucleus of cancer cells. Tests suggest this intranuclear radiosensitisation technique could intensify the effects of radiotherapy.

Along with radiotherapy, chemotherapy assumes a frontline position in the battle against cancer. However, many drugs fail to enter cancer cell nuclei when they should. This often leads to multidrug resistance in tumours and a diminished response to radiotherapy.

In recent years, scientists have turned their attention to theranostics in a bid to develop multifunctional therapeutic options that diagnose and treat target cells simultaneously. And the system devised by Jianlin Shi of the Shanghai Institute of Ceramics and colleagues certainly falls into the theranostic category.

Central to their system is a new generation of fluorophores called upconversion nanoparticles that convert low energy near infrared radiation into higher energy visible radiation – they are therefore ideal imaging probes. Mesoporous silica containing upconversion nanoparticles were covalently tagged with an amino acid sequence to direct them into the nucleus. A chemotherapeutic and radiosensitising drug called mitomycin C was also attached.

The researchers carried out in vitro studies on a cancer cell line and were able to show that their system killed more cancer cells than free mitomycin C or when the nanoparticles were without the amino acid tag, so only reached the cytoplasm. Further in vivo studies in mouse models proved the system was biocompatible. The most noteworthy results were seen when cancer cells were exposed to high energy x-ray radiation alongside the nanotheranostic treatment. This is thought to come from synergy between the chemo- and radiotherapy resulting in greater DNA damage. In cancer mouse models, treatment with the nanotheranostic system and radiotherapy not only inhibited tumour growth, but most remarkably, resulted in a roughly 60% regression of it.

‘This study illustrates the principle of the “detect-to-treat” strategy and proves highly valuable for various cancer theranostic applications, thus finally fulfilling the ultimate goal of “one drug fits all”,’ explains Shawn Chen, a leading theranostics expert at the National Institute of Health, US. Indeed, the nanoparticles’ combined imaging and therapeutic properties bode well for them initiating a new generation of accurate imaging guided nuclear-targeting nanomedicines.

Shi envisages that the system could eventually be tested in humans. However, he cautions that a number of improvements and preclinical animal tests, ‘such as suitable surface engineering to improve its biocompatibility and attachment of active targeting ligands to enhance the accumulation of the nanoparticles in tumours,’ are necessary.