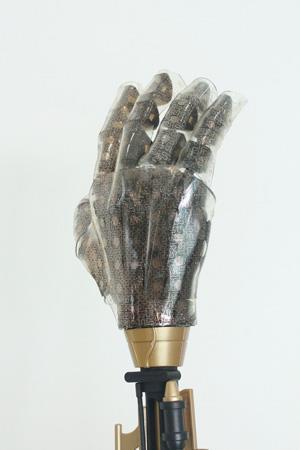 An artificial skin that wraps around a prosthetic hand and senses touch and warmth has been developed using traditional electronics. The flexible sensors array was demonstrated in a rat model, where signals were transmitted and sensed in the brain.

Many robots and prosthetic limbs have been created, but their skins cannot sense their environment. This new stretchable prosthetic skin comes equipped with ultra-thin, single crystalline silicon nanoribbon sensors for strain, pressure and temperature, as well as humidity sensors, heaters and stretchable multi-electrode arrays for nerve stimulation. The skin is tuned to stretch as befits its location on the prosthetic.

The group says that their design can dramatically boost perception capabilities in changing environments. Integration of stretchable humidity sensors and heating elements allows for the sensation of skin moisture and body temperature regulation, respectively.

Electrical stimuli can be sent from the prosthetic skin to the body to stimulate peripheral nerves via an ultra-thin multi-electrode array. ‘The overarching goal is for arrays of stretchable sensors to capture information about the external environment and ultimately interface these devices with peripheral nerves to transmit signals to the brain,’ explains study author Roozbeh Ghaffari.

‘We built the systems very thin and that allowed for very low bending stiffness, which then allows you to wrap around any surface and to be able to stretch. You need to do some work on the geometry side to bring interconnects between individual sensors,’ notes Ghaffari, who is a co-founder of MC10, a company developing wearable sensors based on the same technology. MC10 collaborated with Korean scientists to develop the artificial skin.

‘This is a fantastic demonstration from a technology point of view. It is a combination of well-known systems and approaches, but they have made something that looks really impressive,’ says soft matter physicist Siegfried Bauer at Johannes-Kepler University in Linz, Austria. ‘Other groups have shown similar things, but not with the complexity shown here.’

He points to a recent paper by George Whitesides’ team at Harvard University, US, where they developed an ionic skin that senses stimuli using ions – just like natural skin. ‘I like both approaches,’ says Bauer, ‘but we’ll have to see which one wins out. This one relies on traditional materials but is extremely well advanced.’

‘The authors report some significant advances and wide-ranging demonstrations that pull together many different types of materials in sensors and actuators for the skin, with additional examples of interfaces to the peripheral nervous systems,’ comments materials scientist John Rogers at the University of Illinois. ‘The work powerfully illustrates the scalability and wide-ranging capabilities of ideas in ultra-thin, silicon-based, epidermal electronics.’

Ghaffari notes that efforts are underway by others to selectively stimulate nerves. ‘Interfacing with peripheral nerves and stimulating individual nerve fibres such that you can pinpoint specific sensations is still very much in its infancy,’ he says. ‘In terms of doing this at high resolution, we are showing how to on the sensor side.’