Can a smartphone stop a norovirus outbreak?

University of Arizona biomedical engineer Jeong-Yeol Yoon and his team have created a highly sensitive portable detection system capable of spotting norovirus at levels that can make people sick. The work was presented the American Chemical Society’s national meeting in San Diego, California on 27 August. 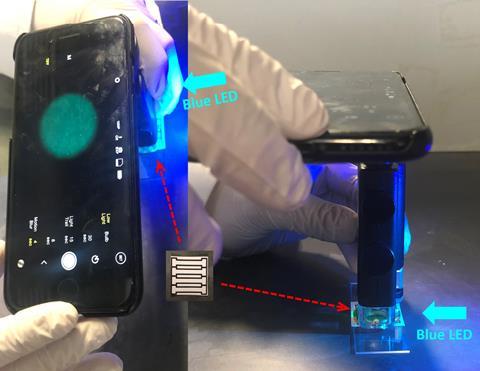 As few as 10 norovirus particles can cause vomiting and diarrhoea in humans and the virus is extremely contagious so early detection is vital to prevent outbreaks. However, the virus does not grow in laboratory cultures and current detection methods rely on specialised and time-consuming PCR (polymerase chain reaction) techniques.

Yoon’s research team previously developed a smartphone-based device that measured light-scattering from norovirus-bound polystyrene beads in a paper microfluidic chip. It has now improved the device’s detection limit by changing to a fluorescence-based method.

The setup uses a microscope accessory with a separate light source and two optical filters. He and colleagues also designed a 3D printed case to house the components.

To test a sample, it is first added to the paper microfluidic chip, followed by a suspension of fluorescent beads labelled with norovirus antibodies. After three to five minutes, the antibodies bind to any norovirus particles in the sample, creating aggregates of the fluorescent beads that spread out along the channels of the chip. The resulting increase in fluorescence intensity around each norovirus particle can be detected by taking a picture of the chip with the smartphone’s camera.

An app that the team has also developed then analyses the picture to calculate the sample’s norovirus concentration from the pixel count in the image. So far, the lowest detection limit corresponded to about 5 or 6 norovirus particles per sample, Yoon says. He estimates that the material costs of this system, aside from the cell phone and app development costs, are about $200.

Yoon suggests the system could be used by governmental officials to analyse local groundwater sources in areas with heavy septic tank usage, where nearby ground wells are at risk of contamination. He adds that cruise ships, where this virus is a scourge, would also greatly benefit from such a handheld detection system.

‘When you have a norovirus outbreak on a cruise ship, you are required to dock at the nearest harbour and evacuate all of the people aboard – that’s a big financial loss,’ Yoon says. Crew could swab door knobs and surfaces on the vessel and quickly test the samples. ‘My point is actually to monitor the environmental samples as a preventative measure, rather than just reacting,’ Yoon says.

The technology could be adapted to detect other viruses and compounds by using different antibodies, says Yoon. His research team is currently investigating whether its handheld system can detect perfluorooctanoic acid (PFOA), which has been linked to various cancers and other health effects like endocrine disruption and immune suppression.

‘The PFOA monoclonal antibody is available, but the antibody titre is not very high, and we need really sensitive detection since PFOA is potentially carcinogenic,’ Yoon tells Chemistry World. ‘We can probably further optimise our assay to get [PFOA] detection at a really low level.’