$50 smartphone accessory could be adapted for Covid-19

Researchers from the US have designed a portable 30-minute test that can detect live equine respiratory viruses from nasal swabs using a system that integrates with a smartphone. It represents the first smartphone-based loop-mediated isothermal amplification (Lamp) detection of pathogens in the field of animal health, and could be adapted for Sars-CoV-2. 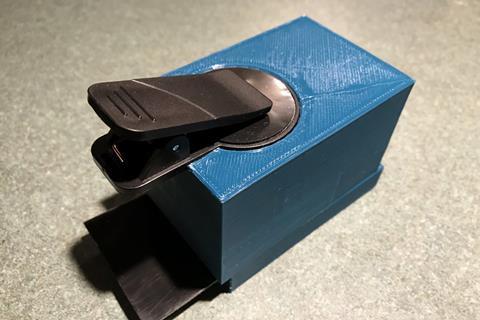 The device clips onto a smarphone

Lamp is a method that amplifies DNA at a constant temperature to generate up to 109 copies of a target sequence in under an hour. Lamp has emerged as an alternative to the polymerase chain reaction (PCR), as it is relatively simple, low cost, and less susceptible to substances that inhibit PCR.

Although Lamp has been used extensively to amplify DNA and has been previously applied to point-of-care diagnostics for infectious diseases, the method still requires access to a laboratory and specialist equipment so is not easily accessible on a commercial or individual level.

Brian Cunningham and his team at the University of Illinois at Urbana-Champaign met this challenge head on by developing a small microfluidic chip that handles all the chemicals and mixing steps involved in Lamp.

Cunningham and his team chose to use equine pathogens that are harmless to humans to test their diagnostic device. They collected nasal swabs from healthy horses and then spiked the samples with five different bacteria and viruses. ‘Equine respiratory diseases are economically very important for animals used in racing and recreation, and the sampling methods, disease transmission routes, and health consequences are very similar to humans,’ explains Cunningham.

Users mix their sample with a buffer solution to break down the outer shell of the virus and release pathogenic RNA. Next, the RNA must be converted into millions of copies of the corresponding DNA sequence, before loading onto the specially designed chip.

Each compartment of the chip contains molecules called primers, designed to amplify a specific DNA sequence from one pathogen. Users must heat the chip on a hotplate to 65°C before they place it into a 3D-printed plastic casing positioned against the rear-facing camera of a smartphone.

A dye added during the assay stains the DNA copies and glows fluorescent green when illuminated by blue LED light from inside the cartridge. If a virus is absent, the channel corresponding to that target appears dark, clearly distinguishing between positive and negative results in pictures taken by the smartphone.

‘When smartphones first came out, I wondered if they could be used for healthcare,’ Cunningham says. ‘Infectious disease detection is an especially great application for mobile diagnostics, since getting the result immediately can help stop the spread of infection to others.’

In addition to the speed of the test – which users can complete within 30 minutes – the system also has the potential for large-scale commercial distribution, given its low cost. ‘We think that the clip-on version of the detection system could be manufactured for less than $50 [£40] each, and that the cartridges could be mass-produced from injection moulded plastic for less than $3 each,’ explains Cunningham. ‘Reducing the cost of testing makes it potentially more widely available, with lower hurdles to using it in parts of the world with less-developed health systems.’

Cunningham says they could modify their testing system for Covid-19. By using RT-Lamp (reverse transcription loop-mediated isothermal amplification) to detect RNA instead of DNA, Sars-CoV-2 and other human respiratory viruses could be detected without drastically changing the reaction conditions.

Jinzhao Song, who specialises in point-of-care diagnostic systems at the University of Pennsylvania, US, believes the detection of human respiratory pathogens using this device is definitely possible. ‘Mass production of this silicon chip needs to be considered. With smartphone apps and cloud development, [this device] could be improved for spatiotemporal monitoring and mapping of the Covid-19 spread.’ 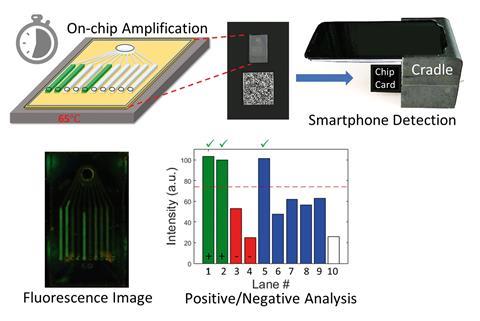 ‘I think the potential for Sars-CoV-2 detection is clear [although] Sars-CoV-2 is a totally different family of virus from the equine viruses [Cunningham] studied here,’ adds Robert Meagher, who develops diagnostic devices for infectious diseases at Sandia National Laboratories, US. ‘The biggest unknown to me is really whether the level of Sars-CoV-2 collected in a swab is going to be within the detection limit of this assay. I expect the method would translate to humans instead of horses, and to other types of enveloped viruses including coronaviruses, [but] the utility for Sars-CoV-2 really comes down to how the pathogen presents in humans, and what levels you need to be able to detect to make a reliable diagnosis.’

Cunningham’s team is busy creating RT-Lamp primers for Sars-CoV-2 and testing a system that uses nasal swabs or saliva for the test material. They are also exploring ways to reduce the manufacturing costs and enable rapid commercial scaling of their device.