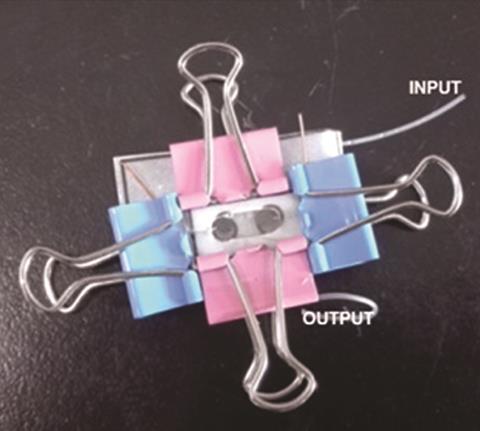 Researchers in China have found a way to integrate the ancient Japanese art of paper folding, origami, into a miniature biofuel cell that can generate energy from soft drinks.

Biofuel cells use enzymes, instead of precious metals, as catalysts to oxidise their fuel. Miniature versions have excited researchers because they are portable and have high efficiency. They could provide power for implants or electronic contact lenses or harvest energy from perspiration. However, designing these small biofuel cells is difficult due to complicated assembly and high costs.

Now, a group of researchers, led by Shaojun Dong from the Changchun Institute of Applied Chemistry, has developed a biofuel cell containing a manganese oxide based cathode and an enzymatic anode into an origami-style device made out of plain filter paper. ’The biofuel cell can harvest electrical energy from the chemical energy of glucose,’ explains Dong.

Origami-style biofuel cells are assembled simply by hand and use cheap raw materials. ’Several researchers have utilised a paper-based strategy for inexpensive and disposable biofuel cells, but these are mostly cathode-limited,’ says Shelley Minteer, a bioelectrocatalysis researcher at the University of Utah, US. In Dong’s case, however, the manganese-containing cathode allows the device to function in the absence of oxygen and doesn’t require noble metals, overcoming the disadvantages of conventional biofuel cells.

The group tested their device in a solution that is widely available to everyone: Coca-Cola. ’Soft drinks like Coca-Cola are very cheap and easy to obtain around the world,’ says Dong. ’The concentration of glucose in soft drinks is suitable for biofuel cells without further dilution.’ The fuel cell was able to generate energy directly from Coca-Cola and other soft drinks.

’Although there is still a long way to go to before we see the large-scale development of these types of cells, the pursuit of origami-based devices for bionsensors and biofuel cells provides the potential for low-cost and sustainable energy production,’ says Donald Martin, a nanobiotechnology scientist at Université Grenoble Alpes, France.

The group plans on operating the origami biofuel cell as an epidermal healthcare device and as an energy supply on a chip in the future.