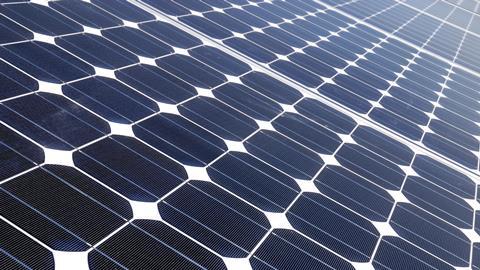 Scientists in Switzerland have developed a strategy for aminating aromatic hydrocarbons using a photoelectrochemical cell.1 The system, which produced a wide range of organic molecules containing an aryl C–N moiety without pre-functionalising the substrate, could open new avenues in organic synthesis.

Photoelectrochemical cells are typically studied for converting solar energy into chemical fuels. In a typical device, water is split into oxygen and hydrogen upon illumination of a photoanode. Although a high reducing or oxidising power can be generated in such cells under mild conditions, their use in organic synthesis has remained limited. ‘A few groups recently started to use photoelectrochemical cells for oxidation of organic substrates, but the substrates were relatively simple and the reactions were not challenging,’ says Xile Hu. Together with Michael Grätzel and other colleagues at the Swiss Federal Institute of Technology Lausanne, Hu has now shown that Earth-abundant hematite can be used as an effective photocatalyst for non-directed arene C–H amination under visible light. ‘This work is one of the earliest demonstrations of using photoelectrochemical cells for broad-scope synthetic methodologies of functional organic molecules,’ Hu says.

Compounds containing an aryl C–N bond are present in many pharmaceuticals. C–H amination is an effective way to synthesise these kind of chemicals, but the reaction usually takes place at high temperatures and a directing group in the substrate is required. While approaches such as photoredox catalysis2 and electrochemical oxidation3 have helped to overcome some of these problems, Hu explains that the photoelectrochemical cell method offers additional advantages: ‘The photoelectrodes are more robust and much easier to separate from the product mixture than molecular photoredox catalysts,’ Hu explains. ‘Also, photoelectrocatalysis utilises energy from sunlight and may open new reactivity patterns compared to electrochemical synthesis.’ 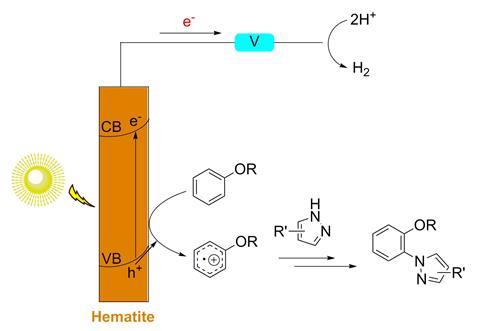 Krishnan Rajeshwar, an electrochemist at the University of Texas at Arlington, US, points out that organic syntheses using heterogeneous photocatalysts have been reported before. ‘Prior methods relied mainly on titania, which largely responds to UV photoexcitation,’ he says. ‘The novelty in this work involves the use of another inexpensive and visible-light-active semiconductor: iron oxide, which is nothing but rust! And the proof-of-concept of arene amination.’

To test their approach, Hu’s team first studied the C–H/N–H coupling of anisole with pyrazole, allowing the reaction to proceed for 10 hours under a blue LED. The best results were obtained using LiClO4 as the electrolyte and a solvent mixture containing hexafluoroisopropanol and methanol. The researchers also investigated more complex substrates (including three known drugs) as well as different nitrogen nucleophiles. ‘Upon illumination, electron holes are generated at the valence band of the photoelectrode. These holes oxidise aromatic compounds to radical cations, which react with nitrogen heterocycles to eventually give the C–N bond-forming products,’ Hu explains. The researchers found an unusual ortho selectivity for many of the substrates. ‘This selectivity is likely due to a hydrogen-bonding interaction between the substrates and the hexafluoroisopropanol co-solvent,’ Hu says.

Rajeshwar agrees that the photoelectrochemical cell approach has advantages over other methods, but also mentions a limitation: ‘I do note the need for a positive potential, presumably to separate the photogenerated carriers,’ he says. ‘Further developments in this area will have to rely on reactor engineering and additional optimisation.’