Researchers in the US have developed a new photocatalysed coupling reaction that could provide a pathway to a huge number of biologically active compounds.

Heterocycles and heteroaromatic compounds are of great interest to medicinal chemists, due to their widespread use in pharmaceuticals. They are able to increase the aqueous solubility and decrease the lipophilicity of drugs, as well as improving their potency and biocompatibility.

It is therefore important to explore reactions that can couple heterocyclic moieties to other molecular fragments, in order to synthesise a variety of drugs. One such reaction is the a-heteroarylation of tertiary amines, which is an unusual construction that is difficult to achieve with typical reagents.

Christopher Prier and David MacMillan, at Princeton University, New Jersey, have found a straightforward and elegant way of doing this, using an iridium photocatalyst. ‘What is really exciting about these photocatalysts is that you can use visible light to excite them,’ says Prier. This is useful because the catalyst can be selectively excited without affecting the activity of any of the other reagents.

The most likely mechanism for this reaction is as follows. The Ir3+ catalyst is converted to its photoexcited state under visible light, and goes on to oxidise the tertiary amine to its radical cation by single electron transfer (SET). Elimination of H+ provides an a-amino radical, which then attacks the electron deficient heterocycle, coupling the two moieties together. Ir2+ then gives up an electron to the newly made complex, oxidising itself back to Ir3+ and enabling Cl– to leave, rendering the entire process redox neutral. No stoichiometric oxidising or reducing agents are required. 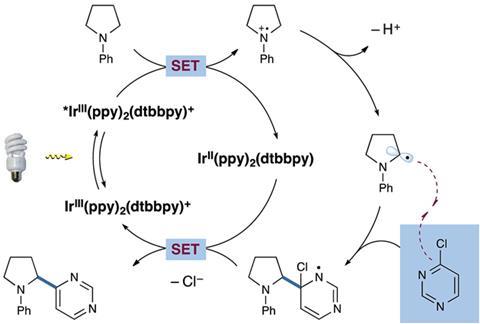 This reaction is extraordinarily versatile, and has been demonstrated to work on a large range of five- and six-membered heterocycles with different functional groups, and both cyclic and acyclic amines. Prier would now like to extend its use to other substrates, such as secondary amines and more electron-rich heterocycles.

Matthew Gaunt, who works on controlled synthesis at the University of Cambridge, in the UK, points out how this work has overcome potential challenges. ‘What is particularly impressive is the ability to use the sort of electron deficient aromatic heterocycles that are ubiquitous in drug-like molecules.’

Total synthesis specialist Steven Weinreb, of Pennsylvania State University, US, is also enthusiastic about the work, ‘Alpha carbo-functionalisation of amines is a longstanding problem in organic synthesis,’ he says. ‘This new methodology is a major advance in this area, and is both clever and practical.’