‘Solar’ jet fuel made out of thin air 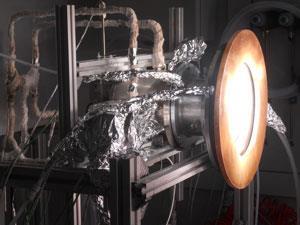 The dream of producing hydrocarbon fuels from carbon dioxide and sunlight is one step closer thanks to chemists in Europe who have made jet fuel from scratch in a solar reactor for the first time. Although the chemists only produced enough kerosene to fill a glass jar, they believe a full-scale solar concentrator could produce 20,000 litres of jet fuel a day.

‘This technology means we might one day produce cleaner and plentiful fuel for planes, cars and other forms of transport,’ said Máire Geoghegan-Quinn, European commissioner for research, innovation and science. ‘This could greatly increase energy security and turn one of the main greenhouse gases responsible for global warming into a useful resource.’

The idea of extracting carbon dioxide from the atmosphere and converting it into fuel is simple enough. At high temperatures carbon dioxide and water dissociate into hydrogen, carbon monoxide and oxygen. The hydrogen and carbon monoxide mixture, known as synthesis gas or ‘syngas’, can then be converted into liquid hydrocarbons such as petrol or kerosene via the well-established Fischer–Tropsch process, which was invented by the chemists Franz Fischer and Hans Tropsch in Germany in the mid 1920s.

Unfortunately, the idea has suffered from two problems. One is that the dissociation of carbon dioxide and water only takes place at very high temperatures, typically above 2200°C. But the other, more difficult, problem is that the syngas cannot be tackled by the Fischer–Tropsch process until all the oxygen is removed as it is dangerously explosive. 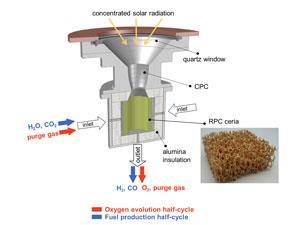 Aldo Steinfeld at the Swiss university ETH Zurich, together with colleagues in the EU-backed Solar-Jet project, solved the first problem of generating high temperatures by exploiting a high-flux solar simulator at the Swiss university ETH Zurich – one that mimics the output from an actual solar concentrator. Various methods have been tried to effectively remove oxygen from syngas, but the one settled on by the Solar-Jet team was the use of cerium oxide, or ceria. When heated to around 1500°C by the concentrated sunlight, ceria reduces to release oxygen gas, which is piped out. In the next stage, this reduced metal oxide reacts with carbon dioxide and water to produce hydrogen and carbon monoxide – syngas – taking up oxygen in the process. Finally, back in its original form, the ceria can be blasted with concentrated sunlight, reducing it once more and repeating the cycle.

The benefit of using ceria is that the oxygen and syngas are produced at different steps and can, therefore, be collected separately, enabling the syngas to be fed straight into the Fischer–Tropsch process. This was performed onsite by Shell, a collaborator on the Solar-Jet project and one of several oil and gas companies developing Fischer–Tropsch for the production of kerosene from syngas.

So far the Solar-Jet group have only managed to produce a glassful of kerosene using the artificial sunlight, and carbon dioxide from a gas cylinder, with an average efficiency for the sunlight-to-syngas process of 1.73%. Nonetheless, collaborator Andreas Sizmann at the German thinktank Bauhaus Luftfahrt believes it is a demonstration that will pave the way for renewable hydrocarbon fuels. ‘This is an extremely important milestone in the long-term process of developing a truly sustainable alternative fuel future,’ he says. ‘The process [draws] from virtually unlimited resources with no prohibitive cost “show stopper” in sight.’

Solar energy engineer Jane Davidson at the University of Minnesota in the US says the production of syngas using concentrated sunlight is still in the early stages of development. ‘Many groups around the world are working on the same process using different reactors, but [have] the same goal of reaching commercially viable solar-to-fuel efficiency,’ she adds. ‘It’s an exciting approach to synthetic fuels that also stores solar energy in chemical form.’

Sizmann says that in the next four years the Solar-Jet group is planning to demonstrate syngas production in a 50kW reactor, powered by real sunlight, which will be big enough ‘to do extensive chemical analysis and tests on the product’. But he believes the real challenge will be to demonstrate that the production chain is economically viable, which would require efficiencies in the region of 15%. Higher efficiencies could be reached through improvements in materials, reactor geometry, heat management, gas management and reactor size, he says. ‘Sunlight, carbon dioxide and water are basically an unlimited feedstock,’ he adds. ‘When the long term goal of 15% overall energy efficiency is reached, 20,000 litres of kerosene per day could be produced in a solar tower system of one square kilometre.’

Correction: This article was updated on 6 May to stress that the research was led by ETH Zurich, and that the quoted efficiency of 1.73% was for the sunlight-to-syngas process only.