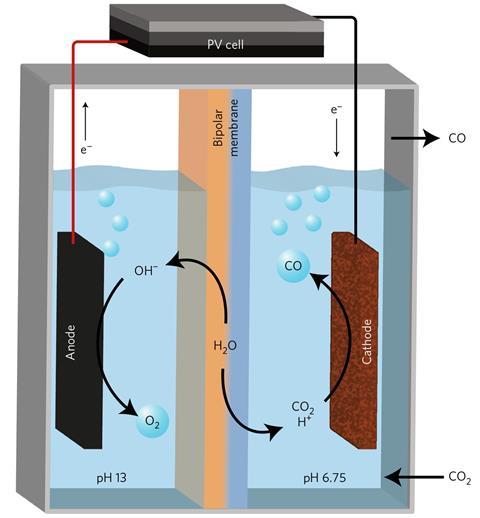 The sun ultimately provides the energy for almost every living organism on Earth, and could supply all of humanity’s renewable energy needs. But storing and transporting this energy is hard. Now researchers in Switzerland have developed a catalyst, made entirely from earth abundant materials, that allows solar-generated electricity to reduce the environmental pollutant carbon dioxide to the valuable chemical feedstock carbon monoxide.

One possible way to close the anthropogenic carbon cycle would be to use renewable electricity to reduce carbon dioxide – such as that produced by fossil-fuelled power stations – to liquid fuels or the ingredients needed to make them. Carbon monoxide, combined with hydrogen, can produce liquid hydrocarbons via the Fischer–Tropsch process.

Unfortunately, carbon monoxide is presently produced industrially by partial combustion of carbon rather than reduction of carbon dioxide – adding more carbon to the atmosphere: ‘We know that, in future, there’s going to be more renewable electricity coming on the grid,’ explains Wilson Smith of Delft University of Technology in the Netherlands. ‘How we use it to transform abundant chemicals like water and carbon dioxide into valuable chemicals is, I believe, going to be one of the pillars of our future energy economy.’

Copper oxide is moderately effective at electrochemically reducing carbon dioxide, producing a mixture of carbon monoxide, hydrogen, formic acid and up to 15 minor products. However, Jingshan Luo of the Swiss Federal Institute of Technology in Lausanne says: ‘It’s very challenging to separate so many products.’ More selective catalysts have usually relied on precious metals such as silver, gold or palladium.

In the new research, Luo and colleagues used atomic layer deposition – a modified form of chemical vapour deposition allowing deposition of single, continuous atomic layers – to cover copper oxide nanowires with a very thin layer of tin oxide. This helps the nanowires to catalyse the reduction of carbon dioxide to carbon monoxide, while inhibiting any further reduction. When uncoated copper oxide nanowires were used as a carbon dioxide reducing catalyst, their selectivity for carbon monoxide peaked at 36%. However, the selectivity of the tin oxide-coated nanowires peaked at 97% and remained high across a broad range of electric potentials – important for a viable industrial solar-to-fuels setup as variable light levels would lead to variable solar cell voltages.

The material can catalyse not only the reduction of carbon dioxide at the cathode, but also oxygen evolution at the anode. However, it catalyses carbon dioxide reduction best at near-neutral pH, but needs alkaline conditions to catalyse oxygen evolution. The researchers created a two-compartment cell, with the cathode compartment at pH 6.75 and the anode compartment at pH 13. If the two compartments were completely separate, proton consumption would increase the pH of the cathode compartment, while hydroxide consumption would reduce the pH of the anode compartment. The researchers therefore placed a bipolar membrane, comprising a cation-exchange membrane and an anion-exchange membrane, between the two compartments – a technique recently pioneered by Smith’s Delft University group and others.

‘Because of the potential across this membrane, water molecules dissociate inside the membrane into protons and hydroxide ions,’ explains Luo. ‘The protons go through the cation exchange membrane into the cathode compartment, and the hydroxide ions go through the anion-exchange membrane into the anode compartment. Thus the overall pH difference of the compartments can be maintained.’ The researchers connected the cell to a triple-junction photovoltaic cell of their own design, allowing the carbon dioxide reduction process to be driven by solar-intensity light. They are now working to increase the catalyst’s efficiency and thereby reduce the over-potential (the voltage experimentally required above that thermodynamically necessary), in the hope of allowing cheaper double perovskite cells to drive the reaction.

‘It’s a nice paper,’ says Smith. ‘It isn’t the first solar driven bipolar membrane; it isn’t the first bipolar membrane carbon dioxide reduction – but it’s good for us to be looking at these systems.’ He says the nickel–iron catalysts presently used for the oxygen evolution reaction in industry are effectively beyond improvement. ‘The focus should be on the carbon dioxide reduction,’ he says. ‘They’ve a really nice selectivity: they need to keep that selectivity for a couple of hundred hours [in the paper, the researchers test the device for just five hours] and bring down the over-potential.’