Iron-deficiency anaemia is still the largest nutritional deficiency disorder in the world, and the only one that remains prevalent in the western world. However, our treatments haven’t really moved past supplements of soluble iron salts, which cause a host of side effects including diarrhoea, constipation and gastro-intestinal inflammation.

Dora Pereira, Jonathan Powell and colleagues at the Medical Research Council’s Human Nutrition Research (MRC–HNR) unit in Cambridge, UK, have developed a nanoparticulate form of iron that can be absorbed from the gut, but with fewer side effects.

Most iron supplements are simple salts like iron sulfate, fumarate or gluconate. Some slightly more complex treatments use chelates like iron bis-glycinate to maintain the iron’s solubility. The conventional view of iron absorption, Powell explains, was that dietary iron is mostly ingested as ferric Fe(iii), but absorbed in the gut as soluble Fe(ii). There are chemical and enzymatic mechanisms to reduce ferric Fe(iii) to ferrous Fe(ii) in the gut, and transporter enzymes to ensure it is absorbed. So supplements of soluble ferrous salts seem sensible.

However, there are two major problems. The chemical environment in the gut, particularly the rapid pH change from the acid of the stomach to the essentially neutral small intestine, as well as the presence of reducing agents like ascorbate, will promote redox cycling between the Fe(iii) and Fe(ii) states. Therefore, any iron that doesn’t get absorbed – which can be up to 70% of the content of a supplement tablet – can cause serious problems, since this redox cycling generates free hydroxyl radicals through Fenton-type chemistry, which leads to inflammation. The second problem is that any remaining soluble iron  will travel to the lower bowel, where it is absorbed by pathogenic bacteria. ‘The iron-hungry pathogens can then outcompete the more favourable gut microflora,’ Pereira explains, ‘which is when you get side effects like diarrhoea.’

Considering both of these factors, the team reasoned that precipitation of iron in the gut acts as a protection mechanism to prevent inflammation and infection. ‘But that raises another question,’ says Powell. Once the iron has precipitated in the gut, it is extremely insoluble, ‘so how are we actually absorbing dietary iron?’

They started looking at ferritin, which is a protein-bound form of nanoparticulate iron oxohydroxide found in both plant and animal tissue. ‘There were some studies suggesting that ferritin might not dissolve, and that the whole particles might get absorbed,’ says Powell. ‘So we did some work, and showed that this absorption route does indeed exist, and the ferritin is then safely processed into available forms inside cells.’ Crucially, ferritin-iron doesn’t redox cycle, and bacteria can’t absorb ferritin the same way, so the remaining unabsorbed iron doesn’t pose the same side effect risk.

The structure of the iron oxohydroxide in ferritin is disrupted by the protein shell, Powell explains, which makes it more easily degraded once it is taken up by gut cells. ‘We can’t reproduce ferritin as a supplement, because it would be too expensive,’ he adds, ‘but we can take the idea.’ 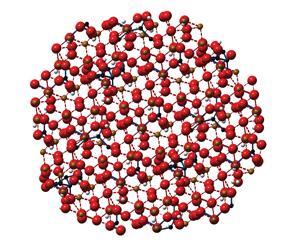 The team has developed nanoparticles of iron hydroxide adipate tartrate (IHAT), in which organic acids are incorporated into the iron oxohydroxide structure. ‘Adipic and tartaric acids are found naturally in our diet and are approved as food additives,’ says Pereira. While the product will inevitably be slightly more expensive to produce than a simple iron salt, the hope is that the reduction in side effects will make it safer and more effective, as fewer patients stop taking the supplement. This should make the overall treatment cost less and be more effective.

Preclinical studies in cells, mice, and humans have demonstrated that iron from IHAT is just as bioavailable as soluble ferrous sulfate, and can replenish haemoglobin levels in anaemic mice. Moreover, IHAT doesn’t induce the detrimental changes in the gut microbiome that soluble iron does.

The team is now looking for funding for a Phase II clinical trial to establish efficacy in anaemic humans and investigate any gastrointestinal side effects and effects on the microbiome. Pereira explains that they applied to the MRC to support a trial in the UK but were unsuccessful.

However, after winning the life sciences arm of the Royal Society of Chemistry’s Emerging Technologies 2014 competition, they teamed up with mentors from GlaxoSmithKline (GSK), who are helping them put together a proposal to the Bill and Melinda Gates Foundation to fund a trial in Africa. ‘We need to go to countries where the clinical need for alternative iron supplements is more obvious,’ Pereira says. Because of the higher background levels of infection in Africa, the side effects of soluble iron supplements are more common and more severe. 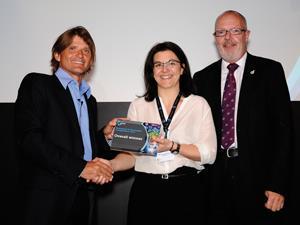 While GSK is not investing financially in IHAT, it is lending expertise in regulatory affairs and the logistics of making these products available in developing countries. If the trials are successful, then GSK’s involvement with the Global Alliance for Improved Nutrition (GAIN) could also help get the product out to patients. But the team will likely need other partners to take IHAT through Phase III trials and into production. ‘Whether those are commercial or not-for-profit operations doesn’t really matter to us,’ says Powell. ‘What we care about is that it reaches the people who need it.’