A catalyst made from soybeans could overcome a major barrier to cheap hydrogen fuel by replacing the platinum catalyst used in the electrocatalytic production of hydrogen, claim scientists in the US. 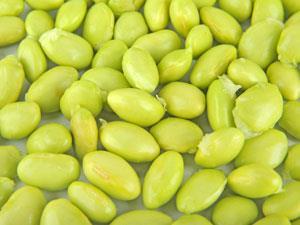 For hydrogen to be competitive with petroleum fuels, the US Department of Energy has estimated that its cost must be reduced from $4–5/kg to $2–3/kg. The platinum catalyst used to make hydrogen via water electrolysis is a significant part of the cost, so the search is on for cheaper catalysts that are just as efficient.

Now, James Muckerman, Wei-Fu Chen and colleagues at Brookhaven National Laboratory, New York, have produced a catalyst made from molybdenum – an abundant transition metal, around 1500 times cheaper than platinum – and ground soybeans.

The team already knew that molybdenum carbide-based catalysts could be used for hydrogen evolution, but they are unstable in strong acid, which is vital for the production process. While looking for new ways to stabilise molybdenum carbide catalysts, Wei-Fu Chen was supervising two high school students, twin sisters Shilpa and Shweta Iyer. Chen tasked the sisters to find an inexpensive source of carbon and nitrogen that could be combined with molybdenum. ‘The students were excited about using familiar materials from their everyday lives,’ says Muckerman. ‘They brought various samples of leaves, stems, flowers, seeds and legumes to the laboratory for testing.’ This led to the group discovering that soybeans made good catalysts when mixed with molybdenum.

Carbon and nitrogen from the soybean proteins combined with molybdenum to make molybdenum carbide and molybdenum nitride, respectively. ‘Molybdenum carbide itself is active but not stable in acidic solution, while molybdenum nitride is corrosion resistant but not suitable for hydrogen production. Synergy between the two gave a stable composite material,’ explains Muckerman. The cheap and easy to prepare material has excellent long-term durability and it catalyses hydrogen production at efficiencies comparable to a platinum catalyst.

‘Platinum-free catalysts are powerful tools for generating molecular hydrogen as a sustainable fuel source,’ says Henrik Junge, an expert in electrocatalysts for hydrogen production at the Leibniz Institute for Catalysis, Rostock, Germany. He also wonders if other precursors could be used to generate the catalyst. ‘This would avoid discussions about the competitive usage of biomass for food versus chemical feedstocks.’

Muckerman and the team are currently investigating if they can synthesise the catalyst directly onto large-area electrodes to further reduce costs for industrial application.