Scientists in China have developed a new catalyst, composed of highly porous nickel molybdenum oxide nanorods, that can catalyse the urea oxidation reaction more efficiently than any previously reported non-noble metal catalyst. This discovery could offer a more cost-effective and energy-efficient route for hydrogen production. 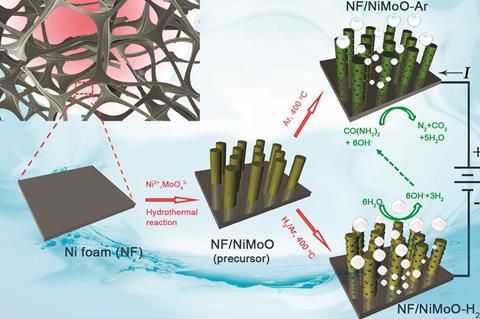 In this study, the group have developed nickel molybdenum oxide catalysts for urea electrolysis with the highest efficiency reported so far. ‘We note that the urea oxidation reaction activity of our catalysts is superior to noble metal electrocatalysts, such as Pt/C and RuO2,’ says Yu. Electrocatalytic activity is sensitive to the valence state and coordination environment of metal centres. Yu’s new catalysts possess high oxidation states – Ni2+ and Mo6+ – which act as active sites and lead to increased activity. In addition, the catalyst’s highly porous structure results in a large surface area with many exposed active sites.

Mark Symes, an expert in electrocatalytic water splitting at the University of Glasgow, UK, remarks, ‘if you have porous materials, you can pack a lot of real surface area into quite a small space and this can give you good catalytic performance.’ However, he cautions that, ‘the results look promising but the researchers need to provide more insight into why the activity is so good.’

When compared to water electrolysis, urea electrolysis can significantly reduce the energy requirements. However, this process will consume the urea. Therefore, Yu proposes that ‘for practical applications, using urea-rich wastewater as the urea source is a good choice; this allows for the simultaneous production of hydrogen and wastewater purification.’ Symes remains unsure of the cost-effectiveness of this technique compared to standard water splitting. ‘Is the expense of obtaining the urea greater than just using water, which requires a little more energy to do the reaction?’ However, he does agree that, ‘if you do have a source of waste urea, you can get rid of this and make a saving on the energy so it is win–win.’