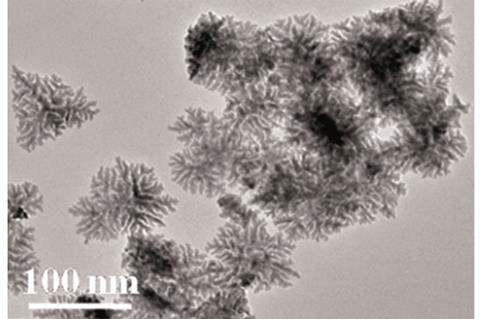 Researchers in China and Singapore have designed a new platinum electrocatalyst for the hydrogen evolution reaction that outperforms existing catalysts and also performs better than theoretical calculations suggest it should.

Now, a team, led by Jong-Min Lee, at Nanyang Technological University, Singapore, and Yu Chen, at Shaanxi Normal University, China, has devised a new way to enhance the electrocatalytic properties of platinum nanocrystals. They packed polyethyleneimine chains loosely around the platinum nanocrystals, endowing them with a branched three-dimensional structure that still left most of the platinum sites available for electrochemical reactions.

The team’s catalyst reports an onset reduction potential much better than the theoretical Nernst value. Lee explains that ‘in acidic medium, the –NH2 groups on the polyethyleneimine adlayers protonate to generate –NH3+, resulting in proton enrichment at the platinum surface.’ David Tilley, a water splitting expert from the University of Zurich, Switzerland, says ‘this could have practical implications in a water splitting system through stabilisation on the water oxidation side, since the anode would require less strongly acidic conditions.’

Lee says that they are now looking into expanding this idea to other systems: ‘We will apply this concept to non-platinum electrocatalysts and other proton mediated reactions.’