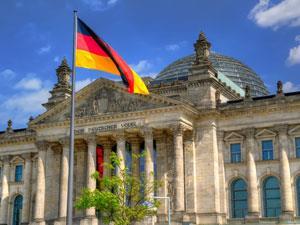 The German government’s goal of increasing overall expenditure on research and development to 3% of GDP in 2015 has been derided as ‘not very ambitious’ by the latest report of the Commission  of Experts for Research and Innovation (EFI). The commission was set up by the German government in 2006 and has been tasked with providing it with independent advice on science and innovation policy.

The EFI calls on the German government to aim for a more ambitious target of investing 3.5% of GDP in R&D by 2020. Overall, Germany invested €80 billion (£59 billion) in R&D in 2013 or 2.85% of GDP. About €54 billion, or two thirds, came from the private sector. Public funding amounts to €26.5 billion, which is almost 1% of GDP. The EFI report was formally handed to the German government at the end of February.

Currently, Germany’s R&D expenditure as a percentage of its GDP is well above the EU-28 average of 1.9%. China spent almost 2% of GDP on R&D and the US almost 2.8% in 2012. However, Germany lags behind South Korea, Japan and the Nordic countries. Sweden, for example, invested 3.2% of its GDP in R&D in 2013. To close the gap on leading innovation nations Germany will have to commit to a more ambitious target over the long-term, the report concludes.

‘Research and development are increasingly important drivers of our economy,’ says Dietmar Harhoff, managing director of the Max Planck Institute for Innovation and Competition in Munich and chair of the commission. ‘Germany should thus invest in activities that offer particularly high returns in the long run,’ he adds. For example, R&D activities support mainly Germany’s manufacturing sector, ‘which makes up about 22% of the added value within the German economy’, Harhoff says. ‘More importantly, this sector, in turn, is responsible for about 80% of the exports.’

In its report, the commission also calls for the government to maintain or grow funding for the so-called excellence initiative. In December 2014, the federal ministers and the government formally agreed to continue this initiative after 2017. The programme was set up in 2005 and has an overall budget of €4.6 billion to cover the period 2006 to 2017.

The aim of the excellence initiative is to make the country an even better place to do science and the humanities. To increase Germany’s international competitiveness, the programme promotes young researchers within graduate schools and top-level research within clusters of excellence. It also supports top-level universities and research areas in Germany to help make them more visible internationally.

In Harhoff’s view, the excellence initiative ‘has given rise to very positive developments’, particularly in terms of putting German universities on the global stage. As a consequence, universities such as Munich or Heidelberg now score higher on the world academic league tables, he adds. ‘The funding needs to be continued,’ he says. ‘Because of the demographic change we have to attract more excellent researchers and students from abroad’.