Scientists in Germany have a new interdisciplinary home for fundamental and applied research on catalysis. The new centre at the Technical University of Munich, brings together researchers from a wide range of fields from molecular and materials science to spectroscopy and computational science. 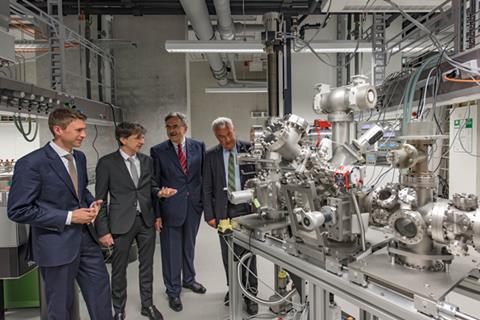 Ueli Heiz, a physical chemist and scientific director of the Catalysis Research Centre (CRC), says such an interdisciplinary approach ‘is essential to develop the substantial new insights’ which are going to be needed to crack the challenges of designing efficient catalytic materials at an atomic level. Nineteen principal investigators will work together on some of the biggest issues of the century such as energy storage, production of new fuels, more efficient and less resource-hungry chemical production, and environmental protection.

The centre is home to industrial partnerships including Municat, a five-year-old venture with Swiss speciality chemicals company Clariant. It is providing €20 million (£15 million) over 10 years to tackle problems such as separating carbon dioxide from industrial processes and re-using it. Researchers are developing catalytic processes to turn carbon dioxide into methane and polymers. Heiz explains that the CRC will work on a major aspect of this challenge, photocatalysis of carbon dioxide to produce fuel – mimicking the way that plants use carbon dioxide and sunlight to produce energy.

Richard Fischer, Clariant’s coordinator at the CRC, says the significance of the centre is ‘to have a centre of gravity of all the scientists in all the disciplines besides chemistry’. Having them together in the same building is a ‘major step forward’ as much for communication, as for the technical aspects of collaboration.

Seventy five labs will enable researchers to cover every aspect of catalysis from spectroscopy and surface science to heterogeneous, homogeneous and bio-catalysis. Together, they’re addressing both the design of catalysts and catalytic processes. Some of the research is close to making it to market, while other work is much more fundamental.

Heiz says the CRC will also work on fundamental questions concerning the physical and chemical environment of the catalyst’s centre and any co-factors involved. Teams working there hope to examine how catalysts can be fine-tuned to make catalytic processes more efficient.

The €85 million centre was funded by the German federal government and the State of Bavaria. As well as the collaboration with Clariant, other industrial partners will be funding projects too. The CRC will also have links to other research centres including the Technical University of Munich’s newly established centre for synthetic biotechnology and a planned centre for protein research.