Curcumin is top of the ingredients list for a highly porous metal–organic framework (MOF) being developed by scientists in China that demonstrates a unique co-release drug delivery system. 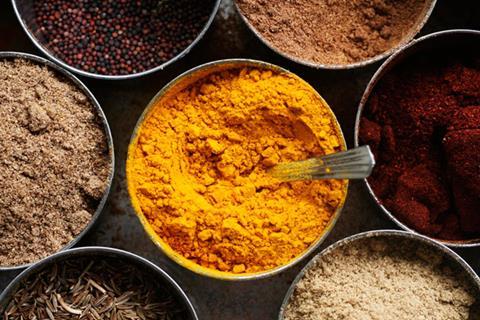 Curcumin is the main active compound in turmeric

MOFs have shown huge potential as drug carriers thanks to their large voids capable of encapsulating a wide variety of guest molecules. However, they are typically built from expensive, petrochemical-derived organic linkers, which, unfortunately, are not biocompatible. To overcome this, a team led by Guangshan Zhu, of Jilin University, has constructed a MOF exclusively from biologically friendly zinc ions and bioactive curcumin – the yellow pigment in the popular Indian spice turmeric, known for its potent anti-cancer properties.

‘The concept of building MOFs from bioactive linkers or metal cations was reported a few years ago, leading to a series of bioactive MOFs based on active drug molecules,’ explains materials scientist Christian Serre, from the University of Versailles in France. ‘However, most of these MOFs suffer from disadvantages towards practical applications, such as a lack of significant porosity.’

The MOF can deliver two drugs for the price of one

Remarkably, Zhu’s curcumin-based MOF displays permanent porosity and a high surface area of 3002m2/g, meaning that additional drug molecules can be loaded inside the pores of this functional framework. Indeed, upon testing their material on a model drug, they find that it can carry and deliver ibuprofen, a common painkiller and anti-inflammatory drug. What’s more, the MOF architecture degrades under biological conditions, releasing the curcumin molecules contained within the framework, affording an exceptional co-delivery system for these two drugs.

‘The work highlights an opportunity to explore other molecules that can act similarly, creating materials that can potentially act as both therapeutic and vehicle,’ comments bioinorganic chemist Seth Cohen, from the University of California, San Diego, US.

Zhu is hopeful that such materials could have real world implications: ‘At the moment we have to take a cocktail of pills, one for each different health problem. If we could incorporate multiple medicines into a single material, we could receive treatments for numerous problems whilst only having to take one pill.’