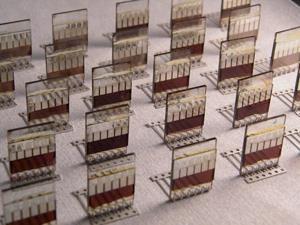 David Lidzey, head of the research group at the University of Sheffield behind the study, explains that there has been ‘interest in developing solar cell materials that are easy to process, efficient and have less embodied energy than current technologies.’

Perovskite films can be fabricated by depositing precursor materials from solution. However, there have been few reports detailing the application of scalable solution-processing techniques to create these films. 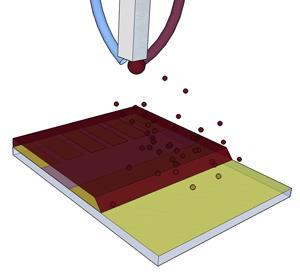 Spray-coating can be used in the large-area, low-cost manufacture of high efficiency solution-processed perovskite solar cells

In this study, an ultra-sonic spray-coating of methylamine iodide and lead chloride created a thin film of a perovskite precursor under ambient conditions. The film was then thermally annealed into a CH3NH3PbI3–?Cl? perovskite structure prior to inclusion within a solar cell with a planar heterojunction architecture.

When the spray-coated film was incorporated in a solar cell, they achieved power conversion efficiencies of up to 11%, the highest efficiency reported for a spray-deposited photovoltaic device to date. Alex Barrows, a PhD student in Lidzey’s group says ‘it’s a demonstration that these materials can work well using techniques that you can use in industry. Hopefully it will encourage other people to use industrially applicable techniques.’

Emilio Juárez-Pérez from the photovoltaic and optoelectronic devices group at Jaume I University in Spain, says until now, the most widely used techniques to deposit the active layer have involved a spin coater or high-vacuum chambers. ‘This interesting work demonstrates that a commercially viable, high-scale production protocol incorporating the spray-coating technique could be valid to assemble perovskite solar cells.’

The team are now looking to use spray-coating to create perovskite solar cells using sequential layers, something previously only done using the spin-coating technique.