A robotic trout not only swims silently through water at similar speeds to its natural counterpart, it can harvest enough energy to power sensors too. The work by researchers in the US could enable robots to infiltrate schools of fish to study them, monitor marine pollution or even operate as naval spies.

Swimming robots are nothing new, but they often require bulky and loud motors with complex mechanisms. More recent robotic fish have been made using soft smart materials but they can only swim slowly or depend on temperature changes to work.

Alper Erturk at the Georgia Institute of Technology thinks that piezoelectric materials are the answer to overcome these limitations. His group made the first untethered piezoelectric robot fish in 2013. Now, Erturk’s team has built on this work by streamlining a robot into the size and shape of rainbow trout, reaching speeds comparable to the real thing.

Piezoelectric materials comprise flexible fibres that expand and contract like muscles in response to electricity. However, they can also generate electricity when the fibres are vibrated by an external force such as wind or flowing water. Flying and land-based robots have been made with the material before.

Erturk’s robotic fish has a silicone tail fin that’s sandwiched between two layers of a piezoelectric material. This material contains fibres of lead zirconate titanate that are separated between layers of a flexible epoxy resin. This is overlaid with waterproof electrodes embedded in a polyimide film. 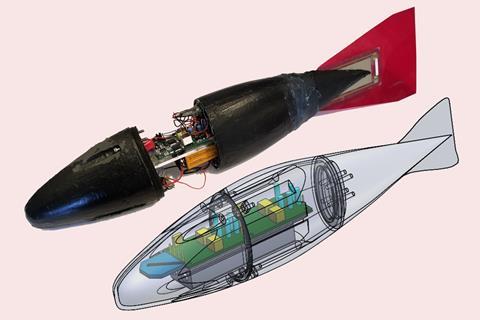 The robot’s body contains all of its electronic components, battery and a Bluetooth module, which allows the researchers to control it with a phone app

The tail fin is removable and makes up a third of the robot’s 30.5cm length – akin to an adult trout. A hollow body and nose, 3D printed from polylactic acid, hold electronics, batteries and energy-harvesting components. A Bluetooth receiver allows the fin’s vibrations to be controlled via a phone app.

Experiments in water showed that the robot could achieve thrust comparable to a rainbow trout, reaching a swimming speed of almost one body length per second. When the robot was tethered, water turbulence can make the tail fin vibrate, which allows it to harvest energy – though not enough to power its own movement.

‘Making it self-powered is doable but would take long time to harvest flow energy and store it in a battery,’ says Erturk. ‘Many hours of harvesting would be required for minutes of swimming.’ However, the harvested energy could be used for on-board wireless sensors to monitor underwater environments. Using piezoelectric actuators means the concept could be scaled up – or down, to as small as millimetre-sized robots.

‘The [researchers] are showing exciting results using a piezo-based actuator applied to a robotic fish,’ says Robert Katzschmann who develops soft robots at the Swiss Federal Institute of Technology in Zürich. ‘I would be curious to see if the robot could also harvest energy while deployed untethered in flowing water. Performing reversible energy conversions, the piezo-based actuator design might also allow for simultaneous energy harvesting and noise damping in industrial settings.’

This story’s headline and standfirst were amended on 13 July 2021 to better reflect the researchers’ previous work.