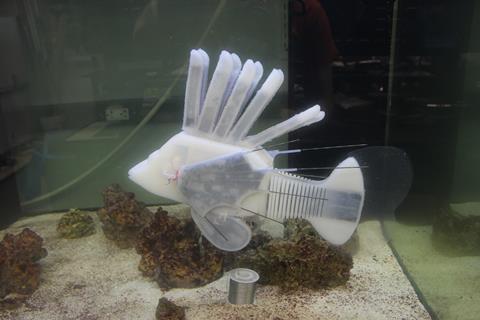 It has electrolyte for blood, two peristaltic pumps as hearts and several flow battery stomachs – this is the robotic lionfish built by US researchers. Just like the real thing, the robofish swims by moving its tail and can fan its pectoral fins – though luckily it isn’t venomous like its biological counterpart.

Robots are usually battery-powered and have a separate system to translate this power into movement. Robert Shepherd and his team from Cornell University’s organic robotics lab combined these usually separate systems. Their electrolyte serves as an energy storage medium for several flow batteries and as a hydraulic fluid for force transmission.

The robot’s soft silicone body takes the shape of a lionfish. Its fins contain thin zinc iodide flow batteries and two pumps cycle electrolyte between different batteries. The tail moves when fluid is pumped from the fin’s left to its right side and the pectoral fins are pushed out from the body when a reservoir is filled with electrolyte.

The batteries have a theoretical energy density half as great as the lithium ion batteries in Tesla’s Model S electric car – enough for the robofish to swim for almost 37 hours before needing a charge. Like its natural counterpart, the lionfish moves graceful and slowly, swimming at only 1.5 body lengths per minute. However, the robotic fish had some buoyancy problems and needed to be weighed down so that it didn’t float to the surface during underwater tests.

Shepherd and colleague hope that their idea of dual function robot blood will inject new life into soft robot research, though their design will need some optimisation before it can match the agility of other robot fish.