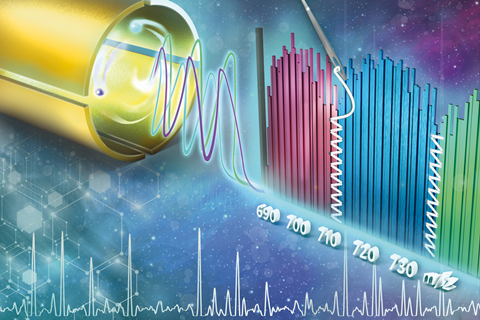 Researchers have developed a new method to characterise complex mixtures.1 The previous record for the total number of unique molecular formulae assigned in a sample was 126,264.2 Now, Mark Barrow from the University of Warwick, UK, and his team have increased this to 244,779.

Their strategy combines custom mass spectrometry experiments with a new data pre-processing algorithm. They characterised a distillable fraction of a vacuum residue of a heavy crude oil as a proof-of-concept, before applying the strategy to a notoriously challenging non-distillable sample due to its high heteroatom content and its manifold compounds of diverse molecular mass and low volatility.

The group employed several tactics to cope with the complex sample. They needed to obtain Fourier transform ion cyclotron resonance mass spectrometry data over a broad mass-to-charge ratio (m/z) range. Traditional experiments would not be able to resolve components at higher m/z because resolution is inversely proportional to the m/z. Therefore, the researchers split the desired m/z range up into segments and acquired data for each, designing experiments to employ almost constant resolving power over the full m/z range. They then used an in-house algorithm to stitch these together, named Rhapso after a character in Greek mythology famous for sewing.

In previous mass spectrometry segmentation methods, mass measurement accuracy has tended to tail off at high m/z. Furthermore, scientists have often used separation techniques such as chromatography before mass analysis, which allows them to separate isomers and therefore obtain more peaks overall. However, this does not necessarily maximise the number of elemental compositions they are able to assign.

‘Our team has seen more peaks in less time with front-end chromatography,’ comments Alan Marshall, whose laboratory at Florida State University in the US also works on characterising complex mixtures. ‘If the point is just the maximum number of peaks this isn’t a record. It’s a record for doing it without front-end separation, yes.’

Fully characterising these tricky residues will provide insight into the chemistry of petroleum. But Barrow adds that those with less expensive, lower resolution instruments will now be able to use this strategy to maximise their performance for characterising other complex mixtures, whether these be petroleum or samples from metabolomics or materials chemistry.