Linking chemistry with surgery to detect cancerous cells in situ

Livia Schiavinato Eberlin is a professor at the University of Texas at Austin, US, and leads a research group focused on developing innovative mass spectrometry technologies to address critical problems in health-related research

As a child growing up in São Paulo, Brazil, Livia Eberlin spent hours after school playing in university corridors waiting for her father, Marcos Eberlin, to finish work. He founded the Thomson Mass Spectrometry Laboratory at the University of Campinas and is a former president of the International Mass Spectrometry Foundation. Her mother has a degree in biochemistry and worked in a zoology laboratory at the same university. It’s little surprise that Eberlin herself is a scientist. 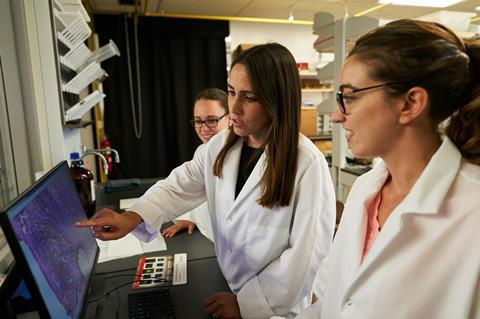 Livia Eberlin (middle) with two of her colleagues

At high school, her interests leaned towards biological sciences, yet Eberlin chose to pursue chemistry at university. Through her undergraduate research, she came to realise how analytical chemistry, and in particular mass spectrometry techniques, could measure molecules directly from biological samples. Mass spectrometry is a powerful technique first reported in 1912 and a multitude of research has seen it developed for various analytes. Many scientists have suggested that mass spectrometry could be adapted to benefit patient care by empowering disease diagnostics and treatment.

Eberlin and her team have developed a pen-sized probe that links up to a mass spectrometer. They call it the MasSpec Pen. Surgeons removing tumours could soon be using a MasSpec Pen to check in the middle of an operation if they have removed as much cancerous tissue as possible. Visually, cancerous tissue can appear much the same as healthy tissue. But since cancer cells metabolise much faster than normal cells, mass spectrometry can distinguish them chemically. ‘I wanted surgeons to take advantage of the amazing analytical technique that is mass spectrometry through a user-friendly interface or device that did not require extensive expertise for use,’ she says.

The probe consists of a 3D-printed polydimethylsiloxane tip with three separate ports to which flexible plastic tubes are connected. One port connects to a vacuum and moves the sample from the probe to the mass spectrometer, a second port lets in compressed gasses to operate the system, and the third port delivers a small volume of water onto the tissue sample, which absorbs a sample of biomolecules from the tissue cells. After about three seconds of contact, the vacuum port sucks the water through the tubing to the mass spectrometer, which produces a mass spectrum. This whole process takes around 10 seconds.

‘The device has to be intuitive,’ explains Eberlin. Peaks in the spectrum correspond to an array of biomolecules including metabolites, lipids, proteins and fatty acids. The presence and abundance of certain tell-tale peaks indicates if the sample is healthy or cancerous. Using the MasSpec Pen to link the sample straight to a mass spectrometer means surgeons need little training to use it; ‘you just hold the pen against the tissue.’

Eberlin has received numerous awards for the MasSpec Pen and her other innovative analytical work, including a prestigious MacArthur Foundation grant in 2018. There are no nominations for the grant, which awards $625 000 to aid talented individuals in any discipline from science to the arts – so there are thousands of potential recipients. ‘It was a real surprise, getting that phone call out of the blue,’ she says.

The funding helped Eberlin continue to build up her research team and develop the MasSpec Pen for clinical use. To date, seven different surgeons have trialled the device in over 100 human surgeries at a major hospital on the Texas Medical Center campus in Houston. Eberlin says it is ‘astonishing to see the quality of the mass spectra produced’ and it is now over 90% accurate at diagnosing normal, and cancerous pancreas, ovarian, lung, thyroid and breast tissues. Spectral profiles from 715 in vivo and ex vivo analyses were obtained from thyroid, parathyroid, lymph node, breast, pancreatic and bile duct tissues during parathyroidectomies, thyroidectomies, breast, and pancreatic neoplasia surgeries. Now that the 2020 clinical tests have finished, ‘we can move further towards finalising a device that more surgeons can take advantage of.’ In 2021, the team plans to expand the tests to two other cancer hospitals. 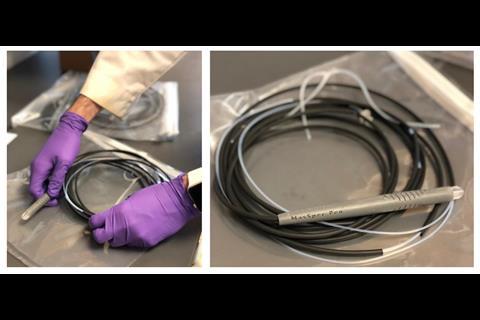 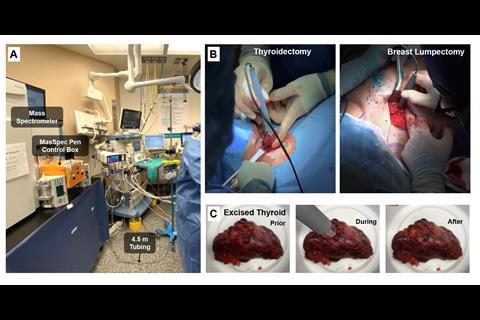 It’s clear that Eberlin has an incredible understanding of how to bridge the gap between the lab and the clinic. She appreciates the difficult and time-pressured decisions faced by surgeons: they balance removing as much cancerous tissue as possible with leaving healthy tissue intact to maximise a patient’s quality of life. Eberlin attributes such success so early in her career to her ‘drive, passion and working hard’, qualities that she looks for in her own students. ‘You have to be passionate about projects. Doing a PhD is long so you need to be vested in the area to keep momentum.’

She has a large team, with 15 lab members working on several projects integrating analytical techniques with biomedicine, and her first students received their PhDs in the last year. As a relatively new supervisor, she describes the workload as intense, ‘you see some of it as a student but when grant proposals and projects and everything are all your responsibility you really realise what it takes.’ ‘Ultimately, I do my best with passion and commitment. There is always more work to be done, but remember you can only get done what you can get done. There is always tomorrow.’