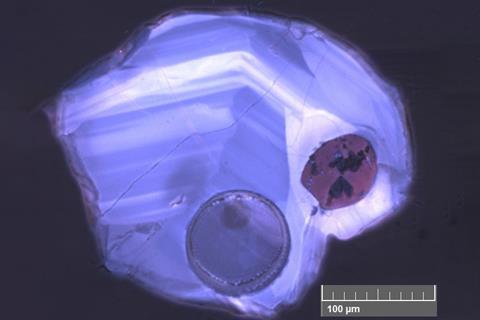 Cathodoluminescence image of a zircon crystal from the Jack Hills conglomerate, similar to the ones studied in this work. Colour shades represent the difference in elemental composition. This grain contains primary inclusions of quartz (red), rutile and muscovite (black)

There is no evidence that natural nuclear fission reactors were widespread on the early Earth. Earth’s crust was actually more like it is today than previously thought. So say researchers who have developed a new analytical procedure to measure uranium isotope levels in tiny crystal structures that are over 4 billion years old.

Rocks can provide clues for researchers trying to reconstruct Earth’s history. No rocks exist that are older than about 3.8 billion years so geochemical studies on the Hadean eon, Earth’s first 500 million years, revolve around incredibly durable zirconium silicate mineral grains called zircons. A sedimentary rock section in the Jack Hills, 800km north of Perth, in Western Australia, contains zircons eroded from rocks as old as 4.3 billion years, making these zircons the oldest recorded geological material on the planet. The size of these samples, however, has limited studies on them to certain elements.

François Tissot at the California Institute of Technology, US, and colleagues have developed a technique using multi-collector inductively coupled plasma-mass spectrometry that can analyse the uranium isotopes 238U and 235U within a sample. Since samples must be diluted for mass spectrometric analysis, the team needed a way to handle liquid volumes 10 times lower than usual so that the small uranium samples obtained from the zircon were elevated to detectable concentrations.

Tissot explains, ‘because the uranium isotope system allows us to probe for the presence of natural nuclear reactors, redox conditions and geochronology, the idea of measuring uranium isotopes in single zircon crystals, particularly Hadean ones, is an important target. There is a lot of potential in achieving this challenging measurement.’

The team applied their technique to 31 Hadean zircon samples and were surprised to find the uranium isotope levels were similar to those found in primitive meteorites. Previous research had shown that early Earth had elevated levels of 235U, high above the threshold required for spontaneous nuclear fission so theory predicted that numerous natural nuclear reactors existed. Natural reactors would have increased Earth’s temperature and radiation levels, and with a largely molten surface and an atmosphere of poisonous gas, even basic microorganisms would not have survived. Tissot’s team found δ238U variations of -0.60 to -0.12‰, nothing near the +24 to +475‰ found near the site of the only known natural nuclear reactor in the Central African state of Gabon.

‘The fact that the composition of Hadean zircons is similar to that of primitive meteorites means nuclear reactors did not influence these zircons’ composition,’ Tissot clarifies. ‘The data indicates that the first 500 million years of Earth’s history was not the hellish environment people typically describe. There was water, as other studies have shown, but no natural nuclear reactors; it’s very much a modern world, just with less oxygen.’

‘One of the most important factors in studying Earth’s history is a reliable geochronological framework in order to understand the sequence of events, from evidence of first life on Earth to dating mass extinction events, but also the time interval over which they occurred,’ comments Anastasia Yanchilina, an expert in isotope geochemistry at the Weizmann Institute of Science, Israel. ‘Tissot’s technique to measure uranium isotopes of single zircon grains improves the ability to measure more accurate and precise dates.’

‘Geochronology can be improved through zircon uranium isotope measurements, but this was always considered impossible analytically. Much to everyone’s surprise, we show that about every other zircon contains enough uranium for high-precision analysis,’ says Tissot. His team is currently streamlining its technique and hope that this study demonstrates how accurate isotope analysis can improve geochemical knowledge surrounding how, and under what conditions, zircons formed.