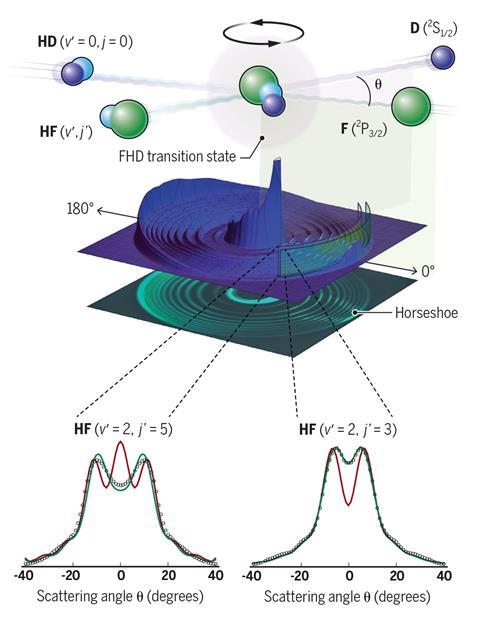 A new frontier has been discovered in how quantum phenomena control chemical reactivity. By colliding beams of two different reactants, a Chinese team spanning three universities has shown that the outcome can only be explained by interactions between electron spin and orbital angular momentum. This is the first time that electronic angular momentum has been found to affect such reactions, explains Xueming Yang from South University of Science and Technology in Shenzhen. The finding is ‘very special’, adds his colleague Zhigang Sun from the Dalian Institute of Chemical Physics.

The crossed-beam approach the team uses is common in experiments seeking to understand the quantum states involved in reactions, explains Sun. In their reaction, one of the beams consisted of fluorine atoms. The other beam, crossing the first at a right angle, contained hydrogen–deuterium molecules. When the reactants collide, the fluorine atom displaces the deuterium atom, forming a hydrogen fluoride molecule, with the products scattering in various directions.

The experimental results are simply stunning. They have achieved a resolution that 20 years ago would have been deemed as unattainable

The transition state between the starting materials and products lasts for less than 10-12 seconds, a picosecond, or quadrillionth of a second. But the crossed beam experiments provide windows on that fleeting world. Varying the collision energy between atoms creates sharp variations, or resonances, in the probability of products forming at a particular scattering angle and internal energy. By measuring that information, researchers can extract information about the quantum mechanical energy level structure of the transition state.

To get those valuable details, researchers typically shine lasers into the collision zone of their crossed-beam reactions. These both detect where the products go and gain information about their electronic structure spectroscopically. Until recently this laser ionisation approach could detect the product molecules’ rotational energy level, but not their electronic angular momentum. Electronic angular momentum energy is much smaller than the rotational energy of a diatomic molecule, Wang says. ‘Its influence on a chemical reaction is therefore subtle and difficult to detect,’ says team member Xingan Wang from Hefei National Laboratory for Physical Sciences at the Microscale.

However Wang, Yang and Sun’s team has developed a more sensitive technique called near-threshold ionisation. ‘The key experimental result in the current work is [detected] with high angular resolution,’ comments Wang. ‘This was not available previously.’ If laser energy is above the ionisation limit, momentum can transfer to the atom and adversely affect the measurements, he explains. Near-threshold ionisation avoids this. ‘By accurately tuning the photon energy during the detection, we can be sure that the products receive just enough photon energy to be ionised,’ Wang says. 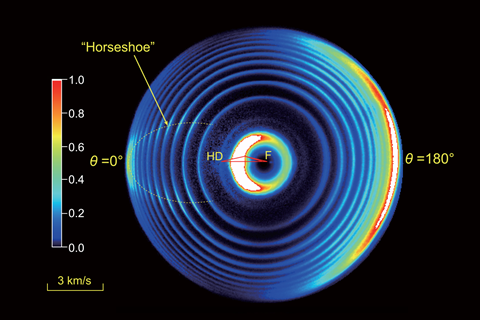 In one particular resonance state, the researchers found a horseshoe-shaped scattering pattern where hydrogen fluoride molecules were in high rotational energy states. The team’s theoretical analysis revealed that the horseshoe pattern had largely resulted from quantum interference between electron spin and orbital angular momentum.

Francisco Javier Aoiz from Complutense University of Madrid calls the study ‘very beautiful work that represents the state-of-the-art in molecular reaction dynamics’. ‘The experimental results are simply stunning,’ he adds. ‘They have achieved a resolution that 20 years ago would have been deemed as unattainable. They have determined quantum-state-resolved angular distributions in the whole range of scattering angles with an unprecedented accuracy.’ He says the effect detected is subtle but reveals ‘interplay of several coupled potential energy surfaces’ that manifests in different ways in other chemical reactions.

While the work provides a fundamental revelation about the influences on chemical transition states, the team now needs to evaluate its full significance, notes Wang. ‘We are planning to further investigate the role of the electronic angular momentum in a more general chemical reaction,’ he says.