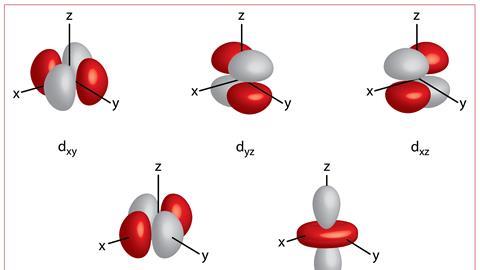 First ever peek at excited molecular orbitals in real time

Using powerful laser pulses and a special photoelectron detector, scientists in Germany have traced excited-state orbitals with femtosecond resolution for the first time. Until now, it was only possible to either map the spatial distribution of electrons in molecules or follow electron transfers over time during chemical reactions.

‘We measured the full momentum–space distribution of transiently excited electrons,’ says Frank Stefan Tautz from the Jülich Research Centre who led the study together with Ulrich Höfer from the University of Marburg. ‘This enables us to trace electron excitation pathways in the true, spatial sense of the word.’ Their work brings researchers one step closer to solving one of chemistry’s greatest challenges: being able to watch electrons move in a molecule in real time.

In their study, the researchers deposited organic dye molecules onto an oxidised copper surface . ‘With a first laser pulse, we excite an electron [in the dye] into a previously unoccupied orbital of the molecule,’ explains Höfer. ‘Then, with a time delay, a second laser pulse emits this electron into the vacuum and into the detector. By changing the delay between pump and probe pulses, we can measure the lifetime of the excited state.’ But the released electrons don’t simply fly around in space, Höfer notes. ‘Based on their angular and energy distribution, they provide a good indication of the spatial distribution of electrons in the molecular orbitals they come from.’

The experimental momentum maps show the frontier orbitals of the dye 3,4,9,10-perylene-tetracarboxylic-dianhydride

The measurements are based on a technique called photoemission orbital tomography, which can determine the shape of molecular orbitals. Until now, the method had only worked for occupied orbitals, explains Ralph Ernstorfer at the Fritz Haber Institute in Germany. ‘The authors have now extended the concept to excited states, which usually only live for femto- or picoseconds,’ he says.

Ernstorfer believes that, in the future, the method could used to study any photochemical reaction. ‘The approach promises that we can record a movie of the electrons during such processes,’ he says. ’While this was shown a few years ago for a reaction of an inorganic system [ indium nanowires on a silicon surface],2 this work is the first demonstration of the concept for a molecular system.’

Höfer points out that an advanced laser system that can produce femtosecond probe pulses with energies in the ultraviolet is required to do this type of experiments. Moreover, ‘we used a novel momentum microscope with time-of-flight detector, which we built ourselves,’ Höfer says. There are only a few suitable femtosecond laser systems combined with this type of microscope worldwide, and such equipment can cost between €2 and 3 million (£1.7–2.6 million) , he adds.

The researchers believe that this technique could one day be applied to gas-phase photochemical reactions. It may also be possible to increase the time resolution from femtoseconds to attoseconds, they say.