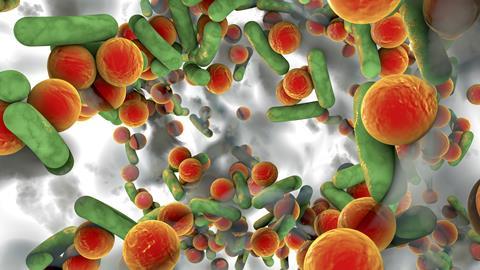 New application for an existing material

A commercially available polymer has been found to have remarkable antibacterial and antiviral properties by researchers in the US. The material kills microbes by dramatically lowering the pH of the local environment and is even effective against drug resistant pathogens.

After recent outbreaks of superbugs like MRSA, antimicrobial coatings have gained increasing attention as a potential way to sterilise surfaces and stop the transmission of pathogens. A team of researchers, led by Richard Spontak and Reza Ghiladi at North Carolina State University, has now discovered that Nexar, a polymer used for water treatment and high performance breathable clothing, could act as an antimicrobial surface.

‘Other materials that have been developed for this purpose work on a very traditional belief that [the material] should be the opposite charge to the membrane of the microbe,’ explains Spontak. In contrast, Nexar is anionic or negatively charged – the same as most microbes – and works by poisoning the local environment. It has sulfonic acid groups in the middle but not at either end of the structure. Water hydrates these sulfonic acid groups, lowering the surrounding pH so drastically that microbes cannot stand it.

The team confirmed that the sulfonic acid groups were the primary mode of action by intentionally poisoning the surface with metal cations. The metal ions formed a complex with the sulfonic acid groups, decreasing the antimicrobial activity. However, treating the material with hydrochloric acid, or even lemon juice, regenerates its pathogen-killing ability.

Source: From the paper by Richard Spontak/North Carolina State University

The material is incredibly effective, killing 99.9999% of a wide range of different bacteria and viruses in under five minutes. Cyrille Boyer, a polymer expert at the University of New South Wales, Australia, says that the polymer ‘could be applied for a broad range of applications, opening new horizons in the fight against multidrug resistant bacteria.’

Another selling point of this antimicrobial surface is that it is completely recyclable – once the material has reached the end of its application life, the polymer can be re-dissolved and re-cast into a new membrane. ‘This material offers the sustainability needed so as to not contribute to a waste problem,’ says Ghiladi.

Spontak says their study is a major opportunity to re-think how these materials are made and ‘opens up a new design paradigm in terms of what people should be considering when they make new materials’.