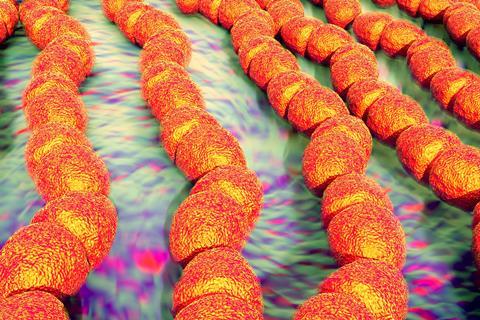 Some species of Enterococcus bacteria have developed resistance to vancomycin

Researchers in the US have chemically altered the antibiotic drug vancomycin in a bid to overcome resistance that has developed in ‘superbug’ strains of bacteria.

Vancomycin has been used for over 60 years to fight infections that have become resistant to other antibiotics, including penicillin. The drug works by inhibiting cell wall synthesis in Gram-positive bacteria, which ultimately kills the organism. However, the increasing emergence of vancomycin-resistant strains shows that bacteria are evolving ways that circumvent the drug’s mode of action.

The World Health Organisation recently published its first ever list of priority pathogens that are resistant to antibiotics, ranking VRE (vancomycin-resistant Enterococci) and VRSA (vancomycin-resistant Staphylococcus aureus) fourth and fifth respectively among those posing the greatest threat to human health. Many healthcare professionals argue that restricting use of antibiotics is key, if only to slow down bacteria developing resistance.

But Dale Boger and his colleagues at The Scripps Research Institute in the US, think that clever molecular modifications of drugs could be a long-term solution that staves off the evolutionary forces responsible for resistance and allows for more widespread use of antibiotics. Previously, Boger’s lab has made vancomycin analogues containing two modifications, each inhibiting bacterial cell wall synthesis via different mechanisms. In vitro studies confirmed that its activity against vancomycin-resistant organisms had been reinstated with 100 times more potency than the original form. 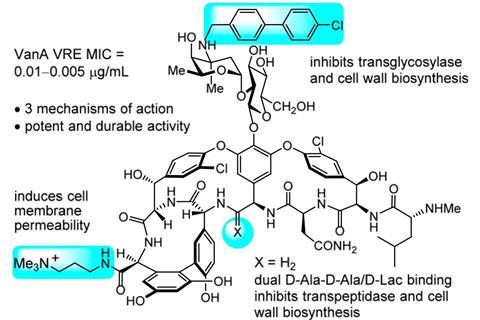 Source: © National Academy of Sciences of the USA

The modifications give vancomycin three lines of defence against bacterial resistance

Now Boger’s team has added another functional group to the molecule which affects permeability of the bacteria’s lipid membranes, further weakening their cell walls. Combined with the previous two alterations, it produced a 25,000-fold increase in vancomycin’s killing power against VRE. This could potentially make it the first antibiotic to have three independent lines of defence against bacterial resistance. Experiments showed that after 50 rounds of exposure to the drug, bacteria were unable to evolve resistance, unlike other antibiotics which often succumb to resistance a lot sooner.

‘This increases the durability of this antibiotic,’ says Boger. ‘Organisms just can’t simultaneously work to find a way around three independent mechanisms of action. Even if they found a solution to one of those, the organisms would still be killed by the other two.’

‘The development of antibiotics with multiple mechanisms of action is an important area as these molecules could reduce the likelihood of antimicrobial resistance arising,’ comments Sean Nair, who investigates antimicrobial resistance at University College London, UK. He is excited by the three-pronged approach, but remains cautious. ‘The research is at a very early stage and it is currently unknown if the molecule will be useful for treating infections in humans.’

For the efficacy and safety of the modified drug to be established, animal and human tests must now be carried out. And the enhanced vancomycin was made via a lengthy 30-step process – something that Boger’s team is now trying to shorten to reduce its cost.