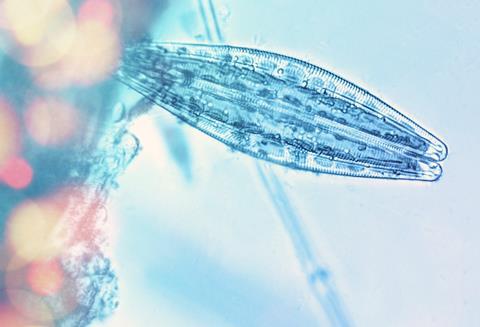 Organic carbon generated by diatoms serves as a base for marine food webs. Finding an alga that biosynthesises halogenated anilines means another organism probable consumes them

Trihalogenated anilines are not purely anthropogenic chemicals. Researchers in Germany have discovered that marine diatoms also produce and release the compounds,1 which serve as flame retardants in building materials and attract substantial environmental concern as they are persistent and toxic if released.

‘Up until now we assumed that these compounds were problematic because they are introduced to the environment by human beings and we monitor their presence with a kind of zero tolerance policy,’ says Georg Pohnert of Jena University in Germany, who led the research. ‘Now we know that natural organisms are also producing halogenated anilines we need to rethink our idea of defining thresholds for considering them problematic.’

The microalga Nitzschia cf. pellucida lives in many places, including European beaches, but is not dominant. Pohnert’s team discovered that N. cf. pellucida naturally produces the halogenated anilines 2,4,6-tribromoaniline, 2,4,6-trichloroaniline and their dibromochloro and bromodichloro derivatives, as chemical defences. Industry makes and uses tribromoaniline as an additive or coating to prevent flammability in building materials, paints, textiles and plastics. And trichloroaniline is important as an intermediate for manufacturing benzene derivatives, fungicides and mono-azo dyes.

In its natural environment, the alga is in a balanced microbial community, called a biofilm, and toxic compounds made by it do not constitute an environmental threat. ‘The alga has produced these compounds for thousands of years so the environment has adapted to their production and everything that the alga contribute is completely unproblematic,’ says Pohnert. ‘If there is a compound that has been around for ages through evolution there is also another metabolising it, otherwise it would build up.’

Halogenated anilines were previously considered to be of exclusive synthetic origin

‘It’s a pathway that is unprecedented. Halogenated anilines have never been discovered as natural products before and they may also lead to the discovery of new enzymes that could be used for halogenation of aromatic compounds in general,’ says Pohnert. He adds that his team is now going to look for bacteria that degrade these unusual natural products and could therefore act as natural bioremediation agents.

‘The study from Georg Pohnert’s group describes a fascinating new aspect of halogen metabolism from a group of alga where we had very little knowledge. Just as exciting is the discovery of trihaloanilines, which were considered xenobiotic compounds, being synthesised by a living organism,’ comments Frithjof Kuepper, a marine biodiversity expert at the University of Aberdeen, UK. ‘This is not just a very new facet of chemical defence by alga, but it may also bring about a better understanding of the biological degradation pathways of halogenated compounds in nature.’

‘This is a really cool study by the Pohnert lab who continue to discover fascinating chemistry from microalgae,’ comments Bradley Moore. In 2014, Moore and his team at the Scripps Institute of Oceanography in the US documented a marine bacterium that produces other halogenated aromatics also once thought to solely be produced by humans.2 ‘Nothing is known about how microalga catalyse their halogenation reactions to compounds like bromoform, cyanogen bromide, and now tribromoaniline, so it will be exciting to see how this new study inspires biochemical work in understudied, yet globally important, marine microalgae.’