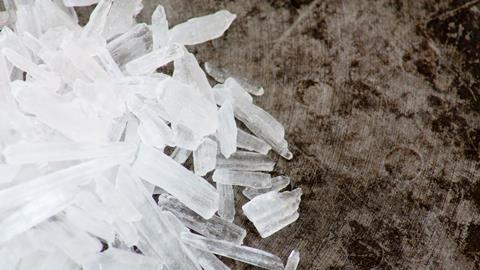 This week, love is in the air - chemically, that is. Here's Simon Cotton: 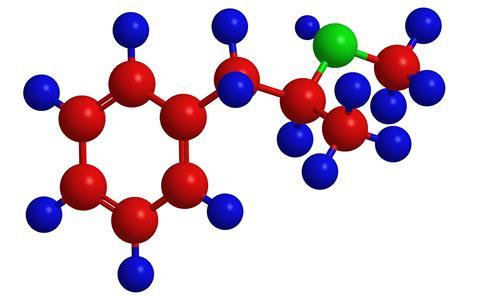 Replace one hydrogen in the side chain of phenylethylamine by a methyl group, and you have amphetamine, otherwise known as benzedrine. The body's enzymes do not recognise it, so it lasts longer than phenylethylamine in the body. It constricts blood vessels and acts as a nasal decongestant; benzedrine inhalers were first marketed in 1934. But benzedrine also has strong stimulant effects, so it was not long before these inhalers were abused. Replace another hydrogen in amphetamine with a methyl, this time on the amine group, and you've got methamphetamine, which is even more potent. Both sides in the second world war used it to keep themselves awake, whether they were bomber pilots or sailors keeping watch. The free amines are not water-soluble, so amphetamines are normally used as solid salts.

After the war, there were big stocks of amphetamines left over, especially in Japan, which caused a drug epidemic there. Post war Americans saw amphetamine and methamphetamine as drugs that gave them a lift and helped them in their jobs or housework. Coast-to-coast truckers used them to stay awake at the wheel, and since a side effect of amphetamines is appetite loss, they were widely used as prescription drugs to fight obesity (and stress). 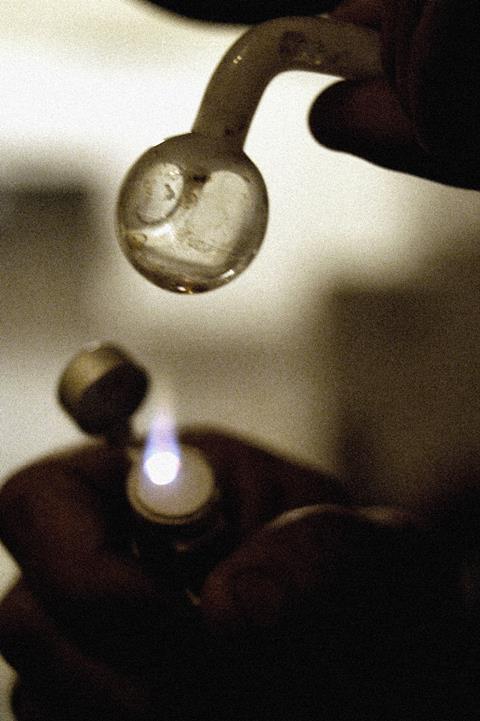 Because of its 'go-faster' characteristics, methamphetamine started to be known as 'speed' in the early 1960s. It got into youth culture. Motorcycle gangs on the west coast of the US spread it around. In 1967 The Small Faces, a British Mod group, recorded a speed anthem - 'Here come the nice'. Over in the US that same year, the 'Summer of Love' in the Haight-Ashbury region of San Francisco was fuelled by marijuana and psychedelics like LSD, but the following year things went badly wrong with a wave of intravenous methamphetamine injection. The motto changed from 'peace and love' to 'speed kills.'

Amphetamines work as central nervous system stimulants; they do this by promoting release of important neurotransmitters, chemical messengers like dopamine. This has the effect of stimulating regions of the brain linked with vigilance and the action of the heart, so that the blood pressure and heart rate go up. Amphetamines alleviate fatigue and make the user feel stronger, euphoric and more alert.

Most drugs of abuse like cocaine and heroin are plant-based, and can be intercepted at national borders, but methamphetamine is a synthetic drug. One reason that amphetamine abuse is widespread in countries like the US is that methamphetamine can easily be synthesised, not just in laboratories, but also in trailer parks, motel rooms and ranches. Cookbook instructions are readily available on the internet. Two methods that have been described involve the reduction of ephedrine (itself readily available from over-the-counter cough remedies) with either lithium in liquid ammonia, or else red phosphorus and iodine as the reducing agents.

If methamphetamine hydrochloride is recrystallised carefully, you can get large crystals that have become known as 'crystal meth' or 'ice'. These can be smoked rather than injected, which has also contributed to increases in methamphetamine abuse.

Because of the energy rush they give, sportsmen used amphetamines long before they turned to steroids, and they were banned from the Olympics in 1967. In 2002, the Scottish skiier Alain Baxter finished 3rd in the slalom at the Winter Olympics at Salt Lake City, US. He was the first Briton, ever, to win a medal in alpine skiing, but within a few days a urine test detected traces of methamphetamine, and he lost his medal. 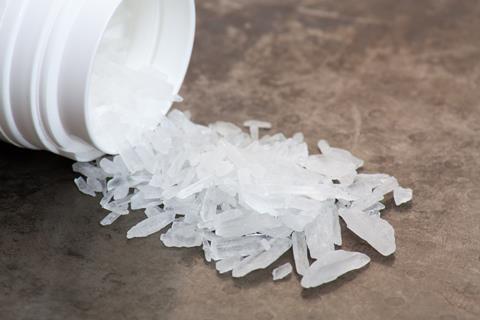 Baxter had had nasal congestion for years, and used British Vicks nasal inhalers to relieve the symptoms; they contain chemicals like menthol, camphor and methyl salicylate which shrink inflamed membranes. He saw a Vicks inhaler in a shop that looked just like the ones he used in the UK, so he bought it. American Vicks contains some different compounds to British Vicks, one of those is laevo-methamphetamine. L-methamphetamine is simply a decongestant, and has little stimulant activity, unlike its optical isomer, dextro-methamphetamine. Sadly, the International Olympic Committee regulations make no distinction between the isomers.

In a way, Baxter was fortunate - he only lost a medal. In 1967, the British cyclist Tom Simpson was competing in the Tour de France. On stage 13 on 13 July, he died from a heart attack while climbing Mont Ventoux. His death was brought on a by a combination of intense heat, some brandy he'd drunk, and Tonedron - a form of methamphetamine.

People argue about the dangers of taking methamphetamine. But in Tom Simpson's case, speed killed.

A controversial compound indeed, there. That was Uppingham School's Simon Cotton with the energising yet abusive chemistry of methamphetamine. Now, next week, the birth of a popular drink as well as some home experiments - all with a well respected, disease treating compound.

In the 19th century, quinine was not only used to treat malaria, but also to prevent it. The British colonists in India consumed quinine as a mixture with carbonated water. It was soon discovered that this drink was much more palatable when mixed with gin, and so the gin and tonic was born. The bitter taste of tonic water is, in fact, due to the basic, or alkaline, nature of the quinine molecule. And with a bottle tonic water, you can carry out a simple experiment that demonstrates another molecular property of quinine. In a darkened room, if you hold a bottle of tonic water under an ultraviolet light, the water will glow with a beautiful blue colour; and it's the quinine molecules which are causing this fluorescence.

Meera Senthilingam
And as well as trying out such experiments - perhaps with a drink in hand - Join Reading University's David Lindsay to find out the origin and malaria-treating of the compound quinine in next week's Chemistry in its element. Until then, thank you for listening. I'm Meera Senthilingam.