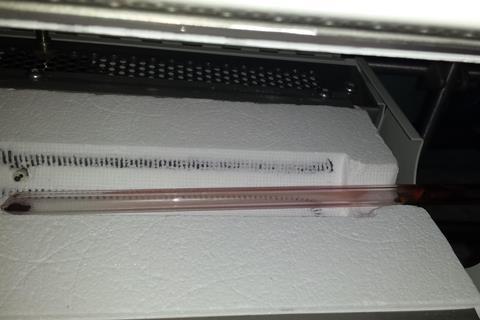 Tech red, an enigmatic technetium compound that has resisted characterisation for half a century, has been identified using chemical detective-work and computer modelling. The molecule’s unusual chemistry may explain why it has proven so difficult to unmask.1

Nuclear chemists have been running into a volatile red oxide of technetium – Tc, a radioactive metal – since at least the 1960s.2 ‘Everybody seems to have accidentally made this a couple of times,’ notes Keith Lawler, a postdoctoral researcher at the University of Nevada Las Vegas (UNLV), US. Although the telltale hue makes tech red easy to spot, it has gone unidentified over the intervening decades. Tech red refuses to form crystals, so can’t studied by crystallographic methods, while technetium’s radioactivity is an inherent barrier to researching its compounds. ‘There are only a handful of laboratories who can work with large amounts of technetium, and even fewer who have access to anything other than simple characterisation techniques,’ explains John McCloy, who investigates radioactive materials at Washington State University, US.

What we don’t know about technetium isn’t just a lack of knowledge about one element, it’s a hole in our understanding of a significant part of the transition metals

In 2017, Lawler was part of a team studying oxides of technetium – that research ruled out many known compounds as the basis for tech red.3 ‘It’s hard to say that we tried every single possibility, but we think we were as exhaustive as we could be, and nothing even came close,’ says Paul Forster, a UNLV chemist who also worked on the project. The results narrowed down properties such as its possible oxidation states and confirmed tech red’s stranger features. For example it forms a red oil, suggesting it has a tightly-bound polymeric or ionic structure, but it evaporates more easily than the better-known oxide Tc2O7, which implies the opposite. 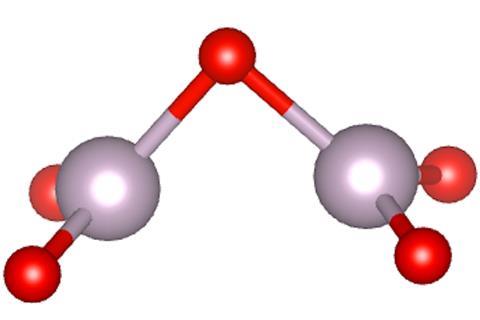 With fewer suspects, more clues and modern computational chemistry techniques at their disposal, Lawler, Forster and their colleagues launched a project to model all of the plausible compositions of tech red. The calculations predicted the colours of the different compounds with a high degree of accuracy, while the chemistry and other properties of the candidates were extrapolated from their electronic structures. In the end there was one plausible candidate: Tc2O5, in the form of two TcO3 triangles that share an oxygen atom.

Tc2O5 has an unusual chemistry that lines up well with the properties of tech red. ‘When I first saw the geometry of the molecule, it didn’t make good chemical sense,’ says Forster. ‘The more I looked at it, the more I came to realise that it is more sensible than I originally thought.’ The electrons responsible for the Tc–Tc bond, which bends the molecule, are the same ones excited when the molecule absorbs green light. Unpaired electrons let neighbouring Tc2O5 molecules bond with each other very easily, making complex and stable extended structures that are a likely candidate for the red oil. The huge variety of possible arrangements of the molecules prevents regular crystal structures from forming. And paradoxically, it’s this reactivity that also makes Tc2O5 evaporate so easily, as Tc2O5 molecules can pair up to form very stable dimers that are far less bound to the rest of the material. 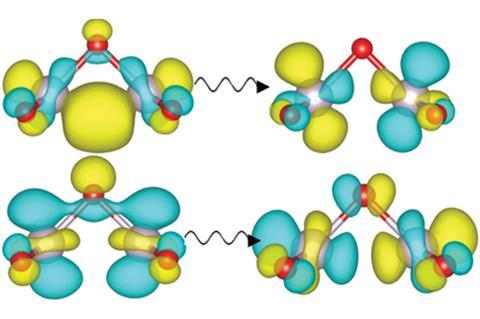 The identification of tech red as Tc2O5 settles a long-standing mystery and provides new insights into technetium’s chemistry, but it could also have practical implications. Technetium is a waste product of reprocessing nuclear fuel and producing plutonium for weapons, and has a half-life of over 200,000 years. One promising method of treating these wastes converts them into glass, at temperatures where volatile compounds like tech red can evaporate. In practice, the chemistry may be more complicated. ‘The liquid waste will be mixed with various additives consisting of silica sand and boric acid as the main ingredients,’ notes Dong-Sang Kim, a researcher in glasses and nuclear waste treatment at Pacific Northwest National Laboratory, US, and therefore the volatile products are likely to be significantly different.

The team hopes to investigate tech red and the other oxides of technetium on a larger scale, where the practical implications can become clearer, in addition to exploring basic scientific questions about the metal. Technetium itself is something of an outlier in its part of the periodic table. ‘What we don’t know about technetium isn’t just a lack of knowledge about one element, it’s kind of a hole in our understanding of a significant part of the transition metals,’ says Forster. ‘It’s such exotic chemistry, I would love to look at it from more of a fundamental standpoint.’