Japanese researchers have designed a series of fluorinated nanochannels, able to selectively remove salt and other impurities from contaminated water samples. With a purification rate three orders of magnitude greater than the current alternatives, the team is confident that this technology can be developed for global water treatment and desalination applications.

‘Fresh water is only 0.01% of total water. Its shortage is one of the biggest problems facing global sustainable development goals,’ explains Takuzo Aida, one of the principal scientists involved in the study at the University of Tokyo. The freshwater crisis is particularly acute across the Middle East. All countries in the Middle East are classified as at severe risk of water stress by The World Resources Institute’s Aqueduct Water Risk Atlas, and rely on desalination and water purification systems for access to this precious resource. 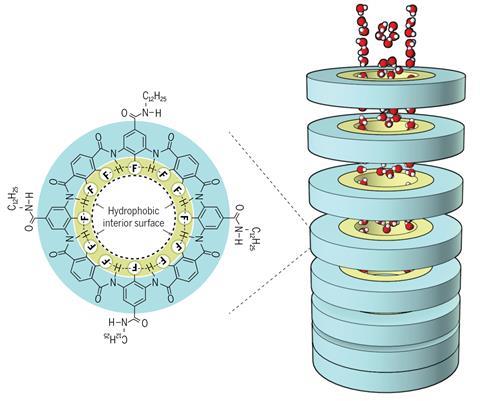 The nanochannel’s interior surface is coated with fluorine atoms, which helps break up water clusters

‘At the moment, desalination and water treatment are dominated by reverse osmosis membranes,’ comments Ihsanullah Ihsanullah, a research engineer at the King Fahd University of Petroleum and Minerals in Saudi Arabia. ‘But studies have demonstrated that the addition of nanomaterials can significantly enhance the characteristics of materials employed in water treatment.’

Reverse osmosis relies on the application of physical pressure to force water through a partially permeable membrane, overcoming the naturally dominant osmotic pressure and filtering out any contaminants in the process. Nature has evolved specialised membrane proteins called aquaporins for water transport in cells but these biological nanochannels have proven challenging to reproduce. Carbon nanotubes are a promising synthetic mimic but suffer from poor selectivity and low permeation rates.

Inspired by Teflon, the Japanese team headed by Aida, Yoshimitsu Itoh and Kohei Sato developed a series of fluorinated nanorings, able to undergo supramolecular polymerisation to form a rigid stack that creates a nanochannel with a fluorine-covered internal surface.

Fluorinated surfaces such as Teflon are extremely water repellent, a property known as hydrophobicity. It’s this extreme water repellence that accounts for the unprecedented permeation rates demonstrated by the fluorinated system. Under normal circumstances, water forms small clusters of molecules, held together by hydrogen bonds. These clusters diffuse more slowly than free water molecules, particularly in the confined space of a nanochannel. However, Aida and his team propose that the hydrophobic surface of their nanochannels suppresses the formation of these clusters, enabling the individual water molecules to diffuse more rapidly.

‘The desalination performance is also very exciting,’ says Siddhartha Das, a mechanical engineer from the University of Maryland, US. ‘Fluorine is negatively charged so there’s a very strong electrostatic repulsion with chloride ions, so nothing passes through. This is a very efficient method of water desalination.’

However, despite outperforming all current purification technologies, there is still work to be done. ‘These nanomaterial-based membranes have excellent potential to be the future technology for water purification, but there are still major hurdles for the application of these materials on a commercial scale. This research is still at a premature stage,’ comments Ihsanullah.

‘It’s beautiful science,’ says Das. ‘My only concerns, or rather, points for development are; is the technology scalable? And is it cost effective?’

These are questions that the Tokyo team hope to be able to answer soon. More research is needed to make these nanochannels practically useful for water purification or desalinisation. ‘However, our work gives an important message,’ comments Aida. ‘What we achieved is to show an extreme example, where people may recognise a possibility of going beyond the upper threshold in permeation rate and salt rejection ability that exists so far.’